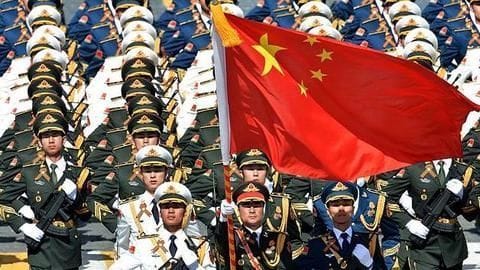 Accusing India of transgressing into its territory, China's People's Liberation Army spokesperson, Wu Qian asked India to remember lessons from its defeat in the 1962 war with China and to stop asking for war.

He was reacting to Gen. Bipin Rawat's statement that India was ready for a two-and-a-half-front war.

Qian further identified withdrawal of Indian troops as a pre-condition for settling the stand-off.

Terming Gen. Rawat's statement on India being prepared to take on threats from China, Pakistan and internal security, 'irresponsible', Qian urged him to take a cue "from historical lessons and stop clamouring for war." PLA accused India of halting its road construction in the Donglang area near Sikkim, while India says that it stopped the PLA which transgressed into the Doka La area and destroyed two bunkers.

China stopped Indian pilgrims from undertaking the Kailash-Mansarovar Yatra through Nathu La through Sikkim to Tibet.

Maintaining that Donglang is part of its territory, Bhutan accused China of violating its boundaries. Fought over the disputed Sino-Indian border, the 1962 war commenced after China attacked in the western sector in Ladakh and eastern sector across the MacMahon line in Arunachal Pradesh.

Suffering an embarrassing defeat, India had to cede strategic areas including Rezang La in Leh, Tawang in Arunachal Pradesh. It also lost control of the strategically important high ground, Aksai Chin, which it reclaimed later.

It is our territory, neither yours, nor Bhutan's Responding to a question on the China-Bhutan boundary dispute, Qian responded that the Chinese troops were operating in Chinese territory and not Bhutanese territory.

"We have made very clear to the Indian side that they should correct their wrong doing and withdraw their personnel from the Chinese territory," he added.

Indian troops withdrawal was further identified as a pre-condition to start a meaningful dialogue.

How is China supporting its claims? China hence asserts that Donglang has been Chinese territory, since ancient times.