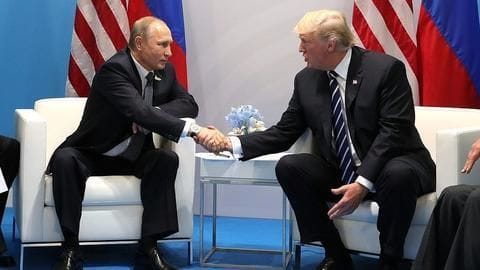 President Donald Trump has backtracked on a proposal to set up a cyber security unit with Russia.

On July 9, Trump tweeted that he and his Russian counterpart Vladimir Putin had discussed plans to form "an impenetrable Cyber Security unit" which would counter threats such as cyber interference in elections.

The proposal attracted widespread criticism by US Republicans who said Russia can't be trusted.

Why Trump backtracked from the joint cyber unit proposal The US is investigating Russia's alleged interference in the US presidential election, and Moscow's alleged collusion with the Trump campaign.

This makes the very idea of a joint US-Russia cyber security unit a political non-starter.

"The fact that President Putin and I discussed a Cyber Security unit doesn't mean I think it can happen. It can't," said Trump on July 10. "It's not the dumbest idea I have ever heard but it's pretty close," said Republican Senator Lindsey Graham.

Former US Defense Secretary Ash Carter said: "This is like the guy who robbed your house proposing a working group on burglary."

Republican Senator John McCain ridiculed the idea saying Putin would be of great help in the effort as "he's doing the hacking."

Don Beyer, a Democratic lawmaker in the House of Representatives, has introduced a measure blocking the proposed cyber security unit. Beyer's amendment would block any Pentagon funds from being used to "share intelligence, information, equipment, personnel or facilities" pertaining to cyber agreements with Russia.