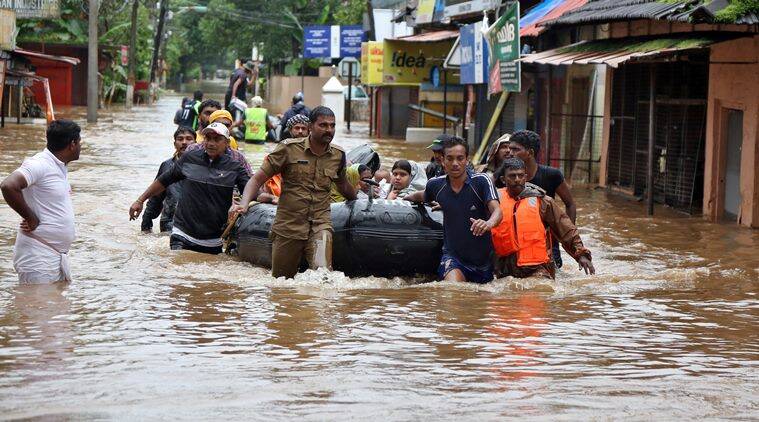 The India Meteorological Department (IMD) has withdrawn the Orange alert it had sounded for 11 districts of Kerala and changed it to Yellow predicting 'moderate rain' in these areas during the day.

Stating that a total of 11 NDRF teams were camping in various districts, CM Pinarayi Vijayan said that Indian Army personnel were also taking part in the rescue operations and the helicopters of the Air Force and the Navy were all set for any mission. Meanwhile, K Babu (Congress) who spoke in the House representing the opposition, urged the government to improve its disaster management system.

The Kerala assembly paid homage to the flood victims and pledged all support to the affected families after which Speaker MB Rajesh declared the House as adjourned today. The session for the next two days stands canceled in the wake of the fresh rain alert as the MLAs have to rush to their respective constituencies to coordinate flood relief programs. The House is scheduled to be convened again from October 25.

Kerala Chief Minister Pinarayi Vijayan has informed that a total of 39 people had lost their lives and 217 houses had been destroyed completely in the devastating landslides and flash floods that had occurred in the south-central districts of the state recently. At least six people were missing and 304 rehabilitation camps were opened after the heavy rains battered several areas of the southern state, he told the Assembly.

The IMD on Tuesday had issued an Orange Alert for 11 districts of Kerala indicating heavy rainfall. Twelve districts in the state were put on Orange alert on Thursday also. The IMD sounded an Orange alert for Thiruvananthapuram, Pathanamthitta, Kottayam, Ernakulam, Idukki, Thrissur, Palakkad, Malappuram, Kozhikode, Wayanad and Kannur districts for October 20. An Orange alert has been issued for all districts other than Kannur and Kasaragod on October 21.

Incessant rains have also caused loss of life in Uttarakhand. The state reported at least 42 rain-related deaths on Tuesday with many people still trapped under the rubble after landslides, while Uttar Pradesh witnessed four fatalities. "The number of casualties in the Kumaon region alone has crossed 40," DIG Nilesh Anand Bharne told PTI.

Kerala is bracing for another round of heavy showers starting today. The India Meteorological Department (IMD) data shows that Kerala has received 135 percent excess rain during the period from October 1 to 19. On October 16 when the IMD had issued a Red alert, numerous incidents of rain-related accidents were reported from south-central districts of Kerala, in which at least 24 people had lost their lives.

Saddened by the loss of lives due to heavy rainfall in parts of Kerala. Central Govt is closely monitoring the situation & providing all possible help.
My condolences and thoughts are with the affected families in this hour of grief & I pray for the safety and well-being of all.

The northern state of Uttarakhand is also facing a fury of rains after the Indian Meteorological Department (IMD) issued a red alert for heavy to very heavy rains. Seventeen people have lost their lives in rain-related incidents. The Badrinath Highway has been blocked by debris in Chamoli. Several tourists are stuck across the state. The Mandakini and Nandakini rivers in Uttarakhand are flowing close to the danger mark.

People living along the banks of the Periyar river basin have been alerted. 64 families would be immediately affected by the opening of dam shutters and have been evacuated. All tourism centers in the district, including Munnar, have also been closed. Minister Saji Cheriyan, who is overseeing relief measures in Alappuzha district, said vigil has been maintained in Chengannur, Pandanad, and Thiruvandoor after the Kakki dam was opened.

Several low-lying areas were flooded in the Kuttanad region, known for its backwater tourism, and evacuations here have started. People have been told to leave vulnerable areas in the region as the water level is set to rise following the opening of the Kakki dam in the Pathanamthitta district.

The India Meteorological Department (IMD) has forecast heavy rain for three days beginning October 20 in several parts of Kerala. An alert has been sounded in downstream areas of the Idukki dam, including suburban areas of Kochi. Evacuation operations have also started for families likely to be affected by the expected flash floods.

The sluice gates of Idamalayar and Pampa reservoirs were opened early on Tuesday in the wake of an increase in the water level and a forecast of more rains in the coming days in Kerala. The development comes a day after the state government opened the shutters of Kakki and Sholayar dams to release surplus water. The Ernakulam district administration confirmed the opening of shutters 2 and 3 of the Idamalayar dam by 50 centimeters each.

A high-level review meeting headed by Chief Minister Pinarayi Vijayan is underway in Thiruvananthapuram to take stock of the rising water levels in dams and reservoirs. The damage caused by the floods and landslides in the past few days will also be deliberated upon.

The minister announced the opening of the dam, constructed across the Periyar river, following the Idukki district administration issuing a red alert at 6:00 pm stating that due to the increase in the dam's water level -- which had reached 2,396.86 feet at 7:00 am on Monday -- there was a possibility it would breach the upper limit of 2,398.86 feet by early Tuesday morning.

Idukki dam, one of the highest arch dams in Asia, will be opened on Tuesday at 11 am based on the state's past experiences and in order to allay people's concerns, state Water Minister Roshy Augustine said.

With our brethren in Kerala affected by torrential rains and floods, DMK Charitable Trust donates 1 crore INR for the efforts undertaken to alleviate their suffering. Let's embrace humanity and support them in this time of need. #KeralaFloods pic.twitter.com/7jATjJGZiA

The toll in the devastating landslides and flash floods that had occurred in the south-central districts of Kerala went up to 24 on Monday, with the Navy and NDRF recovering two more bodies from the slush and debris. The state government has put the number of deaths in rain-related incidents since October 12 at 38.