A look at Tesla Cybertruck-inspired e-bike 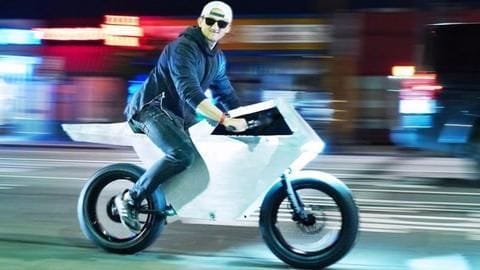 Casey Neistat's latest video, titled world's first Tesla Cyberbike, has made a big splash on the internet with over 1.9 million views already. The popular YouTuber can be seen riding a 'Tesla Cyberbike'. No, Tesla hasn't made a Cyberbike, but it is actually an upcoming Super73 electric bike with a Tesla Cybertruck-inspired shell to hide its design. Take a look.

Background
The birth of a Tesla Cyberbike

As you now know, Tesla Cyberbike isn't exactly an official product. Instead, it is an ingenious disguise made by Super73 to test their new electric bikes. Interestingly, Casey worked with the team that came up with the plan to cover the entire outer structure, giving birth to an unofficial Tesla Cyberbike. And surely, the idea got a ton of attention.

Super73 R
A little about the actual bike

The actual electric bike underneath the Cybertruck-inspired aluminum chassis is a Super73-R. It is a street-legal performance electric motorbike that does not require a license or registration to ride. The bike features an aircraft-grade aluminum alloy frame, a fully adjustable suspension, concealed wiring, all-terrain tires, disc brakes, and a BLDC motor capable of generating up to 2,000 watts of peak power.

Performance
It has a range of over 60km at 32km/h

The Super73-R packs a 960 Whr battery that offers around 64km of range at a speed of 32km/h under the throttle-only mode. There is also an ECO pedal-assist mode wherein you get a range of nearly 120km. The e-bike also comes with a bunch of smart features such as a smart display, turn-by-turn navigation, remote anti-theft security, geolocation tracking, and crash detection.

Information
The Super73-R is available for pre-orders