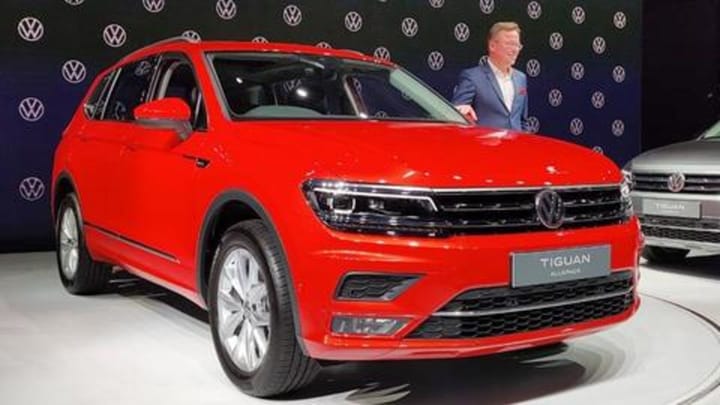 Volkswagen Tiguan AllSpace, the flagship SUV which was unveiled at the 2020 Auto Expo, has finally been launched in India. The premium car arrives as the seven-seater version of the standard Tiguan and is priced at Rs. 33.13 lakh. It comes with an eye-catching look, several hi-tech features, and a BS6-compliant petrol engine. Here are more details.

A look at the Volkswagen Tiguan AllSpace

The Volkswagen Tiguan AllSpace comes with a bulky stance featuring an elongated look with a sleek grille, trapezoidal air inlets, and a sporty side profile with blacked-out B-pillars as well as wheel arches and indicator-mounted ORVMs. The SUV runs on angular-looking 18-inch alloy wheels and gets LED headlamps with DRLs, fog lamps, and LED taillights.

The Volkswagen Tiguan AllSpace is powered by a 2.0-liter turbo-petrol engine that comes mated to an automatic 7-speed DSG (dual-clutch automatic) system, which sends power to all the wheels. The motor is capable of producing 190PS of power and 320Nm of peak torque.

And, what is the pricing?

As far as pocket-pinch is concerned, the Volkswagen Tiguan AllSpace is priced at Rs. 33.13 lakh in the country, which makes it approximately Rs. 5 lakh costlier than the entry-level variant of the five-seater Tiguan. At this price point, the car takes on the likes of Toyota Fortuner, Ford Endeavour, and upcoming MG Gloster.