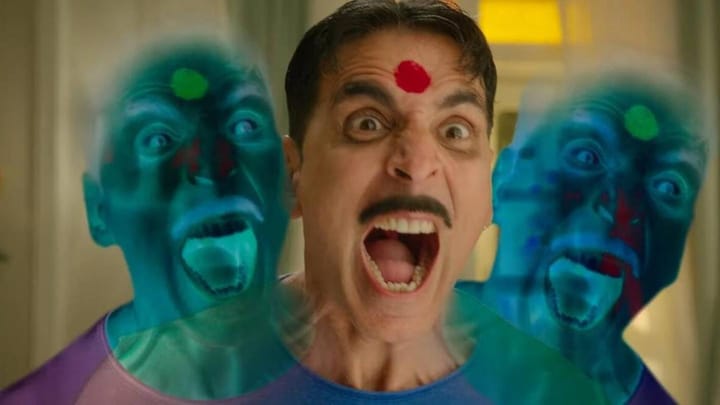 Akshay Kumar's Laxmmi Bomb, which is slated to be released on Disney+ Hotstar this November, dropped its trailer today. An evident mishmash of genres, the trailer is a balance of light comedy and intense horror drama. While watching the trailer, one can't help but be reminded of Priyadarshan's 2007 horror-comedy Bhool Bhulaiyaa, which starred Akshay along with Vidya Balan. Here's more on this.

A circus of family and ghosts

The trailer opens with Akshay saying, "Jis din sach mein mere saamne bhoot aaya na, toh maa kasam choodiyan pehen lunga. (The day I see a ghost, I swear I will wear bangles)." And, in the over three-minute-long trailer, he does transform from being a simple guy named Asif to a mysterious transgender after he is possessed by a spirit.

Watch out for Akshay as a fierce saree-clad Laxmmi

While we have seen Akshay play the funny man before, the scenes in which he plays the transgender stand out. He brings zeal to the role of Laxmmi. The movie seems to be a crazy mix of laughs, scares and general madness. However, the trailer does get a tad boorish and repetitive after a point. We hope we're proved wrong after the movie's release.

The quirky one-liners, a peppy background score, and the dance number "Burj Khalifa" (where Akshay and Kiara are seen dancing against the backdrop of a Dubai desert) make the trailer fun. However, the humor, at times, appears to be dull and flat. The score of the film is done by Amar Mohile, while the songs are voiced by Tanishk Bagchi and others.

What to expect from the movie?

In short, Akshay plays Kiara's love interest, travels abroad to impress her parents, but in a strange turn of events, becomes Laxmmi. From the looks of the trailer, the movie promises plenty of suspense and excitement. In addition, the cinematography by Vetri Palanisamy and Khush Chhabria adds freshness and vibrancy to the frames.

Laxmmi is Akshay's most 'mentally intense' role yet

In a virtual press conference earlier this year, Akshay had said that in his career of 30 years, Laxmmi is his most "mentally intense" role. He gave credit to director Raghava Lawrence, saying that "he introduced me to a version of myself which I did not know existed" and helped him portray the character with "honesty, without offending any community."

'Laxmmi Bomb' will be out on November 9

Laxmmi Bomb is the Hindi directorial debut of Raghava Lawrence and is based on his own 2011 Tamil film Muni 2: Kanchana. Apart from Akshay, Kiara Advani, Lubna Salim and Rajesh Sharma also feature in pivotal roles. The film will be out on Disney+ Hotstar on November 9. Interestingly, the original Tamil film starred director Raghava in the lead role.

Akshay is super busy on the work front

Meanwhile, Akshay has a number of other releases in the pipeline. He has Rohit Shetty's Sooryavanshi, historical-drama Prithviraj, and Atrangi Re coming up. The actor had also recently wrapped up filming for Bell Bottom, a spy-thriller directed by Ranjit M Tewari. Starring Vaani Kapoor and Huma Qureshi, it is slated to hit the theaters on April 2, 2021.