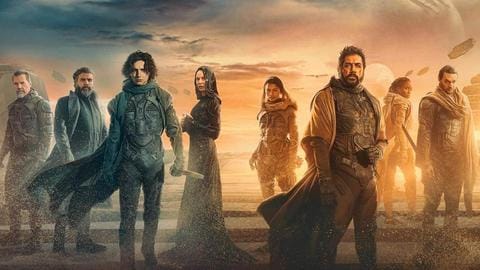 Trailer
Chalamet is Paul Atreides who goes to help Arrakis/Dune

The three-and-a-half-minute trailer opens with Zendaya fondly talking about her planet Arrakis aka Dune, and how "outsiders" have ravaged their land. We understand she is able to pass on this message to Chalamet's Paul Atreides via dreams. Soon, House Atreides is asked to bring peace back on Arrakis by the Emperor and Paul arrives on the dangerous world along with his tribe.

Character
Paul doesn't realize the impact of his 'great destiny'

The clip explores Paul's unrealized capabilities and potential. As per the official synopsis, Paul is a "gifted young man born into a great destiny beyond his understanding," who must conquer his fear in order to succeed. We also see the young character doubt his ability to lead his House as his father says, "A great man doesn't seek to lead, he's called to it."

The work of two-time Oscar-nominated production designer Patrice Vermette is noticeably good and Oscar-winning composer Zimmer's tunes will surely bowl over the viewers. Director of photography Greig Fraser and costume designer Jacqueline West (both Oscar-nominated artists) also don't disappoint. Undoubtedly, it will be interesting to see such a high-scale action movie on the big screen, for countries with functional theaters of course.

Information
'Dune' will release on HBO Max and in theaters simultaneously

Based on Frank Herbert's sci-fi best-seller by the same name that was published in 1965, Dune will be released in theaters and HBO Max on October 22. Before that, it will have its world premiere on September 3 at the 78th Venice Film Festival. Notably, the movie boasts a great cast, including Jason Momoa, Dave Bautista, Oscar Isaac, Rebecca Ferguson, Josh Brolin, and others.