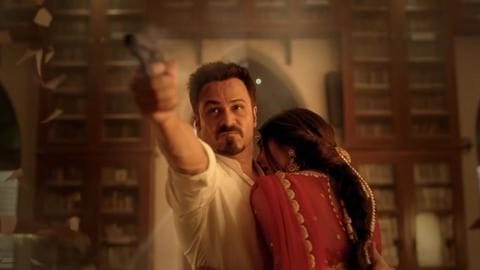 The music video of T-Series single Lut Gaye, starring Emraan Hashmi in lead, just broke a record! The composition became the first Indian song to hit over 500mn views on YouTube within 60 days of its release. Hashmi announced the news on social media today and said it's a "moment of pride and honor." Released on February 17, it has a stunning 502,979,883 views.

Indeed a moment of pride and honor. Grateful to be a part of the legendary song #LutGaye which became the First Indian song to hit 500 million+ views on YT in 60 days. Tune in: https://t.co/JQftwBYC1x #LoveYouToDeath pic.twitter.com/PV5n6GieTr

Details
The song came woven with a beautiful love story

The soulful ballad has a beautiful story woven into the music video, which probably helped with the YouTube views. We find Yukti Thareja as an unhappy bride-to-be coming face-to-face with Hashmi, who is an undercover officer. Both connect on a spiritual level and undergo a roller coaster ride within a single night. Sung by Jubin Nautiyal, the music was composed by Tanishk Bagchi.

Directed by Vinay Sapru and Radhika Rao, the lyrics of the song have been penned by Manoj Muntashir. Interestingly, Lut Gaye marked the comeback of Hashmi and producer Bhushan Kumar for a music video after their uber-successful Main Rahoon Ya Na Rahoon. Upon its release, the song was well received. Notably, it was the fastest track to get over 100mn streams across all platforms.

Records
It's the first Indian song to have 1mn+ Instagram Reels

For the unversed, Lut Gaye also entered the Billboard Global Excl. US charts and was the first Indian song to cross 1 million reel videos on Instagram. Recently, Sapru had spoken about the video. He said while many opined that "a little exposure" was needed to connect with the youth, they stuck to the old-school love story and it resonated well with the crowd.

Quote
A beautiful melody with words that hit you hard: Hashmi

Earlier, while speaking about the track, Hashmi had expressed his confidence in the project. He had said, "We received appreciation and love for Main Rahoon Ya Na Rahoon, and when Bhushan and Vinay Radhika spoke to me about Lut Gaye, I was happy to collaborate on the single. It is a beautiful melody with words that hit you hard (sic)." Congratulations team Lut Gaye!