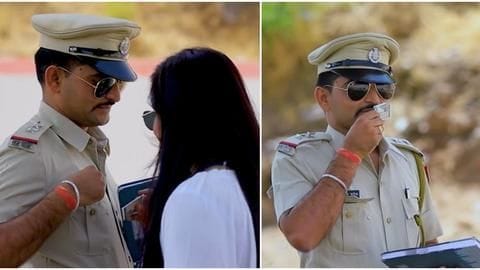 Apart from being obnoxiously expensive, unnecessary, and undeniably cringe-worthy, it seems pre-wedding shoots can also land one in serious trouble at work. Recently, a police inspector in Rajasthan was issued a notice after his seniors saw his pre-wedding shoot, which was uploaded online. In the video, the cop, Dhanpat, is seen donning his uniform, accepting a bribe from his fiancée (now wife), Kiran.

Details
In video, Dhanpat-Kiran fall in love after she bribes him

The video, uploaded on July 10, shows Dhanpat stopping Kiran for riding a scooty without a helmet. He fines her, she apologizes, and then to get away, bribes him. He accepts it, and as he sniffs the note, Kiran walks away with Dhanpat's wallet, with songs playing in the background. To take his wallet back, Dhanpat meets Kiran again, and they fall in love.

Following the emergence of the video, the Inspector General (Law and Order), Dr. Hawa Singh Ghomariya, issued a notice to all range inspector generals of police on August 20. In the notice, the IG acknowledged the pre-wedding video and warned officers against maligning the image of the police force, while also reminding them to uphold the dignity of their uniforms.

Further, the notice read, "Creation of such videos by newly-appointed officers/personnel is unfortunate. Not only does this harm the image of the police department, but negatively impacts the dignity of the uniform." Directing officers to follow the code of conduct, it added, "Henceforth, police officers/personnel are forbidden from misusing the police uniform for filming pre-wedding videos, and action will be taken against offending officers."