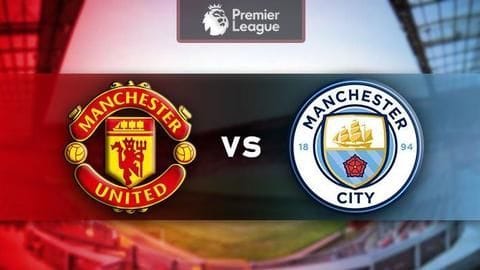 The EPL 2018-19 has reached its business end, but it is yet not clear which club would clinch the title. Meanwhile, Manchester United take on defending champions Manchester City at Old Trafford. City sit on the second spot, two points adrift from leaders Liverpool, but they have a match in hand. On the other hand, United would look to get back to winning ways.

These two clubs are enduring completely different EPL campaigns. City have won their last five matches, whereas, United have faced three losses. Recently, United were humiliated by Everton (0-4), jeopardizing their chances of finishing in top-four. City edged past Tottenham Hotspur 1-0, following the former's exit from the Champions League. This match is crucial for both the teams but City enter as clear favorites.

Talking about players to watch out for, United's Paul Pogba has been shaky of late. However, he is known to make an impact in big matches, and this could certainly be one of them. For City, Sergio Aguero has been known to be at his best against United, thus making him a top draw. United's Marcus Rashford and City's Raheem Sterling can also shine.

Head-to-head
City way ahead than United this term

In terms of head-to-head encounters, United have dominated City historically. In 177 matches, between these two, to date, City have won 52 and lost 73 to United. In 43 EPL matches against United, City have 14 victories, eight draws and 21 losses. However, these numbers tell half the story. Going by the current form, City are way ahead.

Match details
When, where and how to watch