Rafael Nadal reveals the reason behind his Madrid Open loss 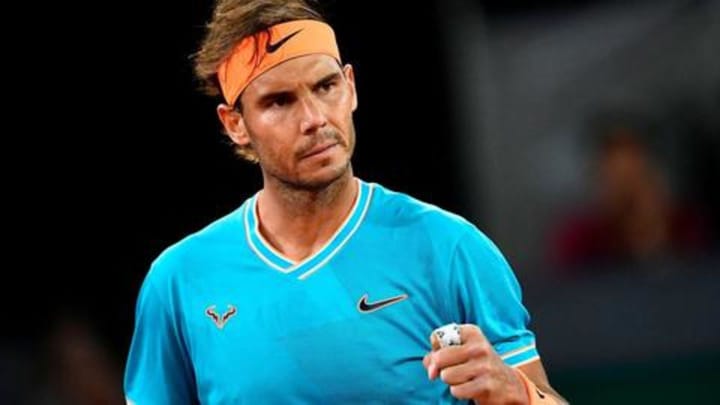 King of Clay Rafael Nadal's woes on his favorite surface continued as he suffered yet another defeat. Greece's Stefanos Tsitsipas tamed him 6-4, 2-6, 6-3 in the semis of the Madrid Open on Saturday. It was Nadal's third consecutive semis loss this year on clay, while he is yet to win a tournament on this surface in 2019. Meanwhile, he reasoned for his loss.

Nadal started off his run at Madrid Open in an impressive fashion, beating Felix Auger Aliassime in straight sets. It was followed by another straight-set win in the pre-quarters over Frances Tiafoe, while his biggest win came in the quarters against Stan Wawrinka in straight-sets again. Although he put up a three-set fight in the semis against Tsitsipas, he could not overcome the pressure.

Nadal wary of not playing to his potential

"I have not played well enough. I've won a lot for many years on this surface, but this year, it hasn't been like that. I didn't have a good feeling today to do the things I wanted to do and that's all," Nadal said.

Nadal rues of not giving his best

Nadal admitted that Tsitsipas is a talented player, besides being young, as he keeps improving with each match. However, he also stated that he did not play the match with enough competitiveness. "I don't see myself losing that match if I play the same level that I played in Barcelona final [in 2018] or in Australia at the beginning of the season," rued Nadal.

Tsitsipas: 'Beating Nadal on clay makes it even more special'

Meanwhile, following the win, Tsitsipas was relieved, while he said that it was unbelievable to imagine beating Nadal on clay. He also said that while he had lost hope at some point, he did manage to find the confidence back. "Really happy that I overcame this and dealt with it mentally. Beating him on clay makes it even more special, I think," voiced Tsitsipas.

As Nadal hopes to make a turnaround on clay this season, he would be wishing to make a strong comeback before French Open this month. However, judging by his current form, the author feels that his chances of a successful title defense at Roland Garros look bleak. While he still has a tournament to go, Nadal's time on clay could be running out.

Considering Nadal's next venture, he would be focusing on defending his Rome Open title in the final ATP Masters tournament before the French Open 2019. He is in a tough draw and would face superstars from the quarters. It is also his last chance to prove himself before defending his crown at Roland Garros.

Cost-of-living crisis: Stressed? These 5 tips may help Mental Health
Grammy 2023: Know who'll perform and when, where to watch Grammy Awards
Urmila Matondkar birthday special: 5 must-watch movies of iconic actor Urmila Matondkar
Hair Toner 101: Why and how to use the product Hair Care

Greece calling? Grab these 5 souvenirs on your way back Travel And Tourism
Greece on your travel list? Check out these unique hotels Athens
National Cheesecake Day 2022: History, celebrations and more Lifestyle
Traveling to Europe on a budget? Explore the Balkans Europe