Happy birthday Ryan Giggs: A look at his illustrious career

When you ask a die-hard Manchester United supporter who they think has been the most important player for the club since the 1990s, the majority will say nobody even comes close to Ryan Giggs. Giggs has been United's stand-up guy throughout his career, and that is what made him the most decorated footballer in English history. Here's a look at the legend's career on his birthday.

Class of '92: The beginnings of a legend

Giggs was among the six youth players who were recruited by Sir Alex Ferguson whose careers at Manchester United began around 1992, and each of whom achieved massive success as they went on to the senior team. Giggs had David Beckham, Paul Scholes, Gary and Phil Neville, and Nicky Butt as his contemporaries. Giggs played in the first team and, at the same time, captained the youth team to FA Youth Cup victory in 1992.

Numerous records held by the man

Giggs has won an unprecedented 13 Premier League titles, as many as Manchester United have won. He has provided the highest number of assists in Premier League history - 162. He is also the only footballer ever to have played in and scored in 22 and 21 Premier League seasons respectively. The most decorated player in English football's history, Giggs has 34 titles.

Giggs is credited with the best FA Cup goal ever 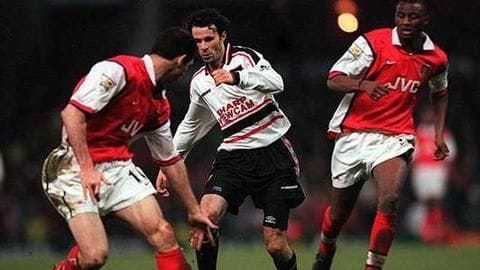 The year 1998-99 was the most glorious year in the modern history of Manchester United, and in that season, Giggs proved his genius in the semi-final of the FA Cup against Arsenal at Highbury. Giggs picked up the ball in his own half and dribbled past the entire Gunners' defense before placing the ball in the back of the net. "He's cut Arsenal to ribbons!," the commentator had exclaimed.

The numerous achievements of Ryan Giggs

Giggs has won four FA Cups besides his 13 Premier League triumphs. He has also won the UEFA Champions League twice, in 1998-99 and 2007-08. Giggs also has four Football League Cups, and one UEFA Super Cup, Intercontinental Cup, and Club World Cup each.

The legacy that Ryan Giggs has left behind

Was Ryan Giggs the greatest Premier League player ever? No. Was he the best midfielder in English football? Probably not. Then why is he a legend and what is the legacy he has left us? It is that of a man who has made himself one with his club, and of course has been supremely talented enough to hold his place in one of the best European clubs for more than two decades. Thank you Giggs. Thank Fergie for you!