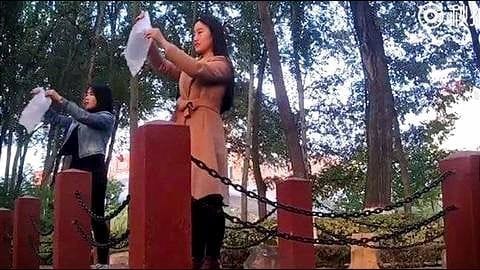 In a bid to combat the deteriorating air quality in China, two sisters in the country have come up with an unusual idea. The women from China's Xining, the provincial capital of the country's western Qinghai, have launched an online start-up to sell fresh air collected from the Tibetan Plateau. Each "fresh air" bag is priced at 15 Yuan (about Rs. 150). Read more!

The duo is seen collecting fresh air in "plastic" bags in a video promoting the online business. Also, people reportedly have a choice of air depending on their preference; they can buy air either from the mountain or the valley. The video explains the process of collecting air and selling it online. The sisters claimed they sold 100 bags so far.

The Chinese women claimed that they started their "fresh air" business not for money but for highlighting the importance and need for better efforts to protect the environment. However, the duo has received flak from many people online who have criticized them for using plastic bags. Plastic bags are not only non-recyclable but are also bad and harmful for the environment.