In a bizarre news, a rare foul-smelling durian fruit variety was sold for nearly 14mn rupiah (Rs. 71, 546) in Indonesia. The variety, 'J-Queen', is on sale at a shopping center in Tasikmalaya, West Java province and its hefty price has caught the attention of social media. People are flocking in the shopping center and clicking selfies with the pungent delicacy. Here's more.

The spiky fruit has been kept on display in clear boxes over red-satin and decorated with fake flowers. The price is over three times the average monthly income in Indonesia, which is 3.94mn rupiah (Rs. 20,133), says Indonesia's manpower ministry. As soon as people got to know about the fantastical price, the fruit became a celebrity and everyone wanted a selfie with it.

The 'J Queen' variety is the brainchild of a 32-year-old Indonesian psychology major called Aka. Aka claims to have created a new and rare version of durian by crossbreeding two superior varieties from different regions in Indonesia. He told media that the 'J-Queen' tree, bears fruit only once every three years and the fruit reportedly has a "peanut and butter taste".

The 'J-Queen' durian is round rather than the typical oblong in shape, and is of yellow-gold color. "My intention is to improve the welfare of farmers by creating superior durians," Aka told the Indonesian news website Tribunnews. He added that he has farms across Java. "I have had durian gardens in Kendal, Pekalongan, Banyumas, Pangandaran, Gunung Tanjung, Manonjaya, and Tasikmalaya," he said.

Statements
Local farmers are not aware of the unique durian variety

However, local farmers in Java say they've never heard of the unique variety. They said the most superior and rare Indonesian durians, the Montong and Kumbokarno varieties, normally sell for about 200,000 rupiah (Rs. 1,021). Notably, durians (or 'king of fruits') are popular across Southeast Asia and people love their creamy texture but many detractors liken their intense aroma to sewage or sweaty socks. 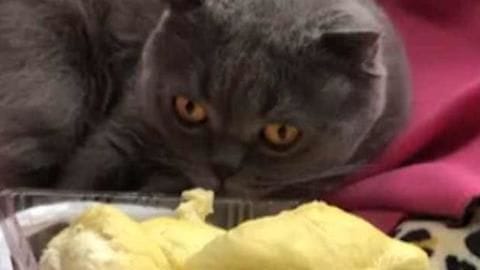 Last May, a video went viral that showed a cat smelling a box of durian fruit, and comically fainting onto a sofa. The video filmed in Beijing, showed the fruit stunned the cat named Dudu, and it reeled back after taking a whiff of it. Since then YouTube has been flooded with videos of cats smelling durian fruit and giving their unintended hilarious reactions.