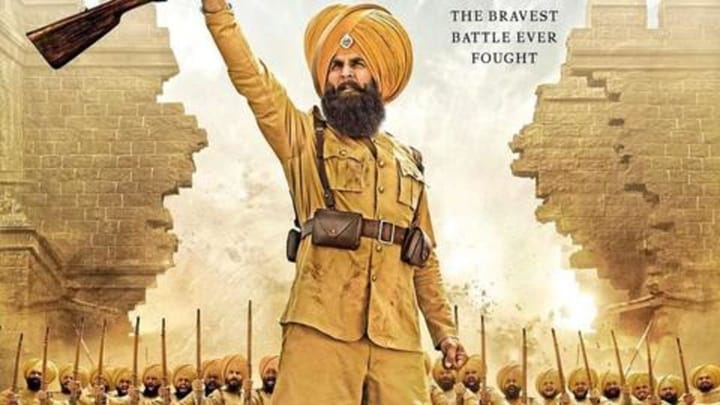 After teasing the audience with intriguing glimpses of Kesari, Akshay Kumar has released the brilliant trailer of his war drama today. As expected, it celebrates the valor and bravery of 21 Sikh soldiers who fought against 10,000 Afghans in the Battle of Saragarhi. Kesari stokes the patriotic fervor among the audience while giving them goosebumps all the way with its warfare sequences. Here's more.

Trailer shows you story of 'the bravest battle ever fought'

The three-minute-long trailer begins with Akshay aka Havildar Ishar Singh, as he gets ready to face the Afghans, recalling how a British officer called India a land of cowards. The trailer then slowly unfolds the story of "the bravest battle ever fought." Since the setting is of 1897, the war sequences shown in the trailer are rustic, with impressive sword fighting, and catchy dialogues.

'Kesari' narrates the story of September 1897's Battle of Saragarhi

Helmed by Anurag Singh, Kesari narrates the incredible story of the Battle Of Saragarhi, which was fought before the Tirah Campaign. For the uninitiated, this battle was fought between 21 soldiers of the British Indian army's Sikh Regiment and 10,000 Afghan tribesmen in September 1897. The regiment, which was led by Havildar Ishar Singh, refused to give up and decided to fight till death.

For days, Akshay has been teasing his fans with his posters from Kesari flaunting his fierce look as Ishar Singh. Now, after watching the trailer, there are no second thoughts that the superstar looks convincing in his role of a soldier. Interestingly, this is the first time that Akshay will be seen in a war movie and the actor is quite excited about it.

This is also the first time Akshay will be sharing the screen space with Parineeti Chopra. The actress will be seen playing Akshay's love interest in the movie. Although the trailer was taken over by Akshay's war sequences, Parineeti did manage to leave a mark with her blink and miss appearances. Also, her typical Punjabi kudi look in Kesari did impress us.

Wondering what 'Kesari' means? Find out

For those who are wondering about the name, there is a slight hint in the trailer itself. Ishar Singh can be heard saying that kesari or saffron is the color of bravery and sacrifice, and that's the same in Sikhism as well. Meanwhile, netizens inundated social media with praises for the actor after the trailer got released.

Fans are blown away by 'Kesari' trailer, praise Akshay

'Kesari' to hit the screens on Holi this year

Notably, Kesari will be produced by Karan Johar's Dharma Productions and will also star Bhagyashree and Vansh Bhardwaj in supporting roles. The much-awaited war-drama is slated to hit the screens on Holi, March 21, making it Akshay's first release of the year.