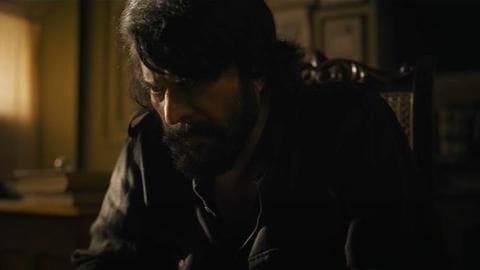 The makers of Bheeshma Parvam have finally released its trailer. Starring Mammootty, Soubin Shahir, Shine Tom Chacko, Farhaan Faasil, Nadiya Moidu, Anasuya Bharadwaj, and Nedumudi Venu among others, the Malayalam film has been directed by Amal Neerad. Touted as a gangster thriller, the movie will hit the cinema halls on March 3, 2022. But before that, read our breakdown of the 1:54-minute-long trailer.

Details
This is what the trailer shows

The trailer begins by introducing Mammootty as Michael, a dreaded gangster. At the 1:04-minute-mark, Shahir's Ajas enters the scene and he leaves us particularly impressed with his strong expressions. Moidu and Faasil appear for a brief while but leave their mark. The action sequences look well-choreographed and apart from the ones mentioned, the casting of the rest of the actors looks pretty appropriate, too.

Observation
Film will be about power politics

The trailer gives us ample reasons to deduce that the film will be about family politics. Because we see some members considering Michael as God, but there are others who refuse to give him that respect, given his age. There are also some who can go to the extent of betraying him, so the reference to "The Last Supper" seems timely in the trailer.

The video ends with actor KPAC Lalitha smirking and chuckling and this short appearance is probably a tribute to the actor. She breathed her last on February 22 after suffering from liver ailments. Bheeshma Parvam will be her first movie to be released after her demise. The trailer, though gritty, leaves us disappointed and that's because Tabu does not get featured in it.

Apart from directing Bheeshma Parvam, Neerad, a National Film Award winner, has also written the project along with Devadath Shaji. The film marks the second collaboration between Mammootty and Neerad after 15 long years. The cult classic film Big B was their first and the duo is set to come together again for the sequel to Big B that has been titled Bilal.