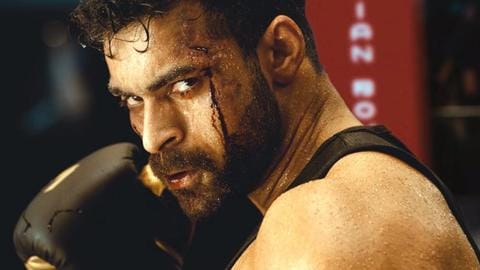 The trailer of Ghani is finally here! Starring Varun Tej in the titular role of a boxer, the Telugu sports drama is gearing up for a theatrical release on April 8. Ahead of that, makers have released its trailer. And going by it, we can conclude that the film will be fiery and Tej appears to be in his best form. Here's more.

The 2:17-minute-long clip begins with Ghani's mother (Nadiya Moidu) asking him to promise that he would never take up boxing, and we know the latter will fail at that as he is "crazy about the sport." Even though Ghani is actively training, he keeps this a secret from his mother as he wants her to know about it only when he becomes a champion.

Observation
Will 'Ghani' follow the typical arc of sports dramas?

Now, sports films mostly follow the same trope: the protagonist is passionate about a particular sport, pursues their dream, meets with a dire situation that challenges that aim, puts their everything into the training, and finally emerges triumphant. The trailer of Ghani showed the same, but Tej's performance was impressive, so if not anything, the film will be a worthy watch because of him.

Details
What else do we know of 'Ghani'?

Other actors like Suniel Shetty, Upendra, Naveen Chandra (main antagonist), Jagapathi Babu make appearances in the trailer, too. Leading lady Saiee Manjrekar, as usual, is restricted to being Ghani's love interest (when will this change?). Meanwhile, Ghani, directed by Kiran Korrapati, had received a UA certificate from the Central Board of Film Certification (CBFC). At the box office, it faces no competition for now.

Information
When will 'Ghani' hit the OTT space?

Separately, reports suggested the regional Telugu OTT platform aha has bagged the streaming rights of the upcoming Telugu film. Usually, the regional platform starts streaming films four weeks after their theatrical run. So, going by this, we expect Ghani to release digitally sometime around May. Allu Bobby Company and Renaissance Pictures are backing the movie, which is the first sports drama led by Tej.