Kanye West calls Taylor-bashing at VMAs an 'act of God' 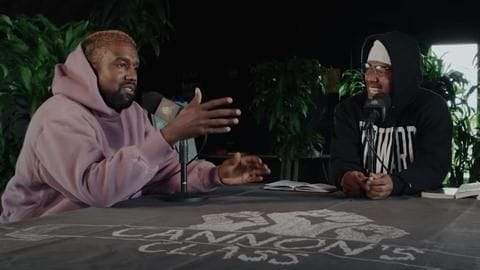 Every believer of God thinks that the Almighty guides us, in matters of dilemma, danger and delight. However, never before has anyone claimed that God has prompted someone to do something stupid, something that deforms public image about oneself. But you have Kanye West now, attributing God for that fateful night when he ruined Taylor Swift's VMA moment of success.

Speaking recently with Nick Cannon on Cannon's Class podcast, this rapper-cum-business tycoon expressed how it was entirely God's decision to make him sit on the front row and crash Swift's acceptance speech after she won the Best Female Video award for her song You Belong With Me in 2009. That incident triggered the Swift-Kimye battle that spilled over into the media.

Rewinding
"Beyoncé had one of the best videos of all time!"

Backdrop
....And guess what, he was drunk that night

Recollecting that night, Kanye admitted to being drinking a bit; a fact he didn't present in order to defend his behavior back then but to claim that his presence was a "set-up." "And I was only drinking Hennessy because I didn't want to go to the awards show because it was a set-up," said the enlightened rapper who is running for President.

That shock probably gave Swift the mileage to fight back with her Kanye-dissing song Look What You Made Me Do (2017). She also had made a note of the incident back then and released it as a diary entry along with the deluxe edition of Lover, her album that got out last year. "Ahh... the things that can change in a week," she started.

Quote
This is how Swift reacted to the incident

"If you had told me that one of the biggest stars in music was going to jump on stage and announce that he thought I shouldn't have won on live television, I would've said, 'That stuff doesn't happen in real-life,'" she wrote, adding, "Well...apparently...It does."