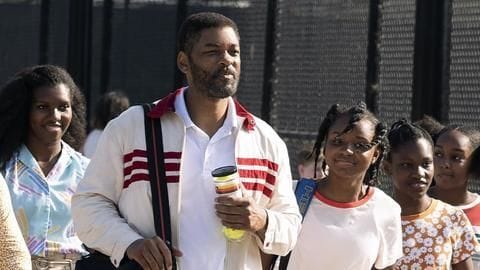 Who doesn't know Venus and Serena Williams? They have won Grand Slams and Olympic gold medals, and even brought style to the tennis world. King Richard is the story of their father, Richard Williams, who has been played by Will Smith. The recently released trailer shows how a determined man helps his two girls become a representative of "every little Black girl on earth."

About
It shows how the two from Compton become legendary icons

Richard wants his children to have a better life than him, as he believes they would become lawyers, doctors or tennis players in the future. It tells the story of how the two girls from Compton, California, become global and legendary sports icons. As shown in the trailer, Serena and Venus's success is not just their hard work. Major credit goes to their parents.

Dialogues
The dialogues deserve a separate round of applause

Written by Zach Baylin, the film's dialogues are wonderfully scripted and thus, deserve a round of applause. When someone tells Richard that he got the next Michael Jordan, he says, "I got the next two." And also this one — "The next step you're about to take, you're not going to just be representing you, but every little Black girl on earth." Wow!

Quote
The dialogues are not just a bunch of words

Some other dialogues spoken by Richard aka Smith keep you hooked. Sample this: "I wrote a 78-page plan for their whole career before they were even born." And, "This world ain't never had no respect for Richard Williams. But they're going to respect y'all."

Performance
Smith was stellar in the trailer, ups expectations from film

When you see Smith in the trailer, there's only one thought: No other actor could have portrayed this character so well. His expressions, onscreen presence, optimism and dialogue delivery, all are on point. Even Aunjanue Ellis, who plays his wife, delivers a wonderful performance, raising expectations. Hidden Figures-fame Saniyya Sidney appears as Venus, Demi Singleton as Serena, while Tony Goldwyn plays coach Paul Cohen.

Directed by Reinaldo Marcus Green, King Richard also stars Jon Bernthal, Andy Bean, Kevin Dunn and Craig Tate. Both the Williams sisters are among the executive producers of the flick, while Will Smith's Westbrook and Tim White-Trevor White's Star Thrower Entertainment are producing it. The family sports drama will hit the theaters in the US and HBO Max on November 19.