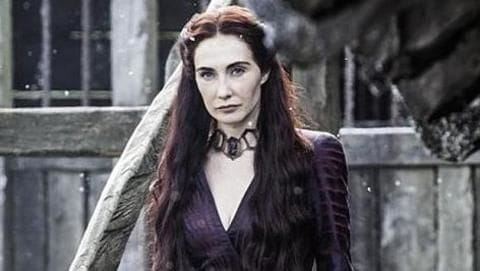 Carice van Houten may not have been among the 12 Emmy wins that Game of Thrones took home this year, but the 43-year-old actor certainly won our hearts with her portrayal of Lady Melisandre on the fantasy drama. In an interview, she talked about Game of Thrones and how she fooled us all with her improvised High Valyrian in Jon Snow's resurrection scene.

Details
She 'improvised the sh** out of' Jon Snow's resurrection

Speaking to The Hollywood Reporter, van Houten talked about how difficult it was for her to learn lines in High Valyrian. She explained, "There's no reference whatsoever. It's like, 'Am I talking Hebrew? Greek? What is this language?'" She then went on to reveal that she "improvised the sh** out of" Jon Snow's resurrection scene. Fortunately for her, we wouldn't even know the difference.

Information
'It was a long day,' van Houten says in defense

The actor added, "I am sure there's a few people that said, 'I knew what you were saying was wrong.' I am sorry. But, you know, it was a tricky time. It was a long day, and I just didn't know my lines."

She also spoke about the beautiful farewell to Melisandre's story. She said, "That last scene where I take my necklace off and [Melisandre] walks off, Liam (who plays Ser Davos Seaworth) makes that exit what it was." She said, "Liam's expression is so ambiguous. You can see him being frustrated about not killing her. But he's also admiring her in a way."

Melisandre's return
Would Melisandre return for 'Game of Thrones' prequels?

Responding to a query from the interviewer about including Melisandre in the Game of Thrones prequel, van Houten said, "It would be fun to see Melisandre as a kid." She said, "I would've liked to see more of her background because she was a slave. That would be interesting to see- a mini-witch." But she quickly added that the character is gone for good.

GoT finale
Unlike everyone else, van Houten found the finale 'smart'

The highlight of the interview was van Houten's take on the controversial Game of Thrones finale, which she felt was a smart move. "I just love the fact that the whole throne was blown away," she said, "The silliness of it was very smart. I thought, 'This is what life is. Some dumbo can become president.'" "That's the world we live in," she added.