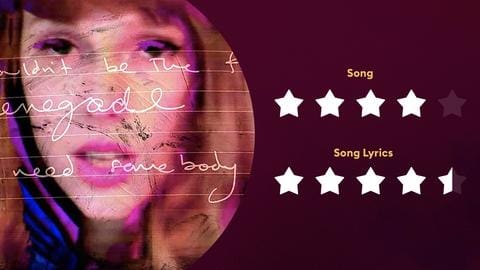 Taylor Swift has made her fans extremely happy by releasing a lyrical video, Renegade, directed by Michael Brown, today. This is the product of her collaboration with Aaron Dessner and Justin Vernon's Big Red Machine project and has been added to their second album, How Long Do You Think It's Gonna Last? Netizens are in awe of its lyrics that indeed touch your soul.

Description
Lyrics is the winner in this song

From its first verse, the lyrics begin to tap your heart, but when it shifts to the chorus, even your soul wants to cry out those lines. "You wouldn't be the first renegade, to need somebody. Is it insensitive for me to say 'Get your shit together so I can love you?'" One can relate to the emotion and meaning that this track conveys.

Swift has a beautiful voice and the lyrics of her songs have deep meaning. Renegade is no different! The words add emotion to her voice. Her soothing sound hooks you to the song, and pushes you to chant along, especially when Vernon joins the singer in the chorus. Renegade sounds like most of the Swift songs, which one can never get bored of.

Information
This song was created after finishing 'Evermore'

Dessner and Swift have earlier co-produced and co-written her 2020 albums, Folklore and Evermore. According to Dessner, Renegade was created "after we finished Evermore and it dawned on us that this was a Big Red Machine song," Variety quoted. In fact, Renegade was recorded during the time when Swift was in Los Angeles for the Grammys. Today, she thanked Dessner while posting the video.

Verdict
The song is beautifully written and composed

The lyrics of Renegade, along with the music, sound wonderful. Swift describes how anxiety and fear can become an obstacle while loving someone. On the whole, the song is beautifully written and composed. To note, the YouTube video of the song, shared by Big Red Machine, has crossed 1.5 lakh views with 41K likes in just four hours. Verdict: 4 stars (song), 4.5 (lyrics).