'The Song We Sang' trailer: A happy escape for women 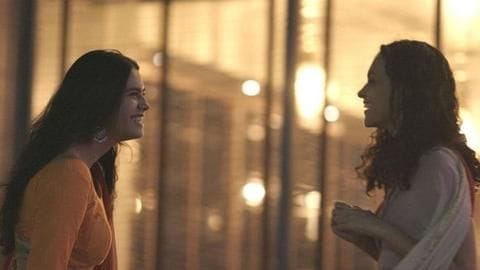 As a society, our people and our cinema have long struggled to do justice to our women. Even struggle is a fancy term here, we haven't even tried as much. And while, 24-year-old Aarti Neharsh's The Song We Sang doesn't look to disrupt that scene, it hopes to touch upon why the average Indian woman is still made to feel insecure about her choices.

Film
What is the film all about?

The Song We Sang, a short film which marks Aarti's directorial debut, follows the connection between Krishna (Serena Walia), a methodical economist, and Alia (Ayushi Gupta), a free-spirited animator, who embark a chance meeting on a beautiful night in Ahmedabad during the Navratri festival. As the night progresses, the two talk, sing, and munch on pani puris, unexpectedly developing a bond with each other.

Details
It is not essentially an LGBTQ movie

As the director herself puts it, The Song We Sang is not essentially an LGBTQ movie. It is about the basic human connect and the mutual energies that two people feel as they meet for the first time. "It's the feeling you get when you exchange a look with someone in a room full of people and know that's your person," Aarti told Firstpost.

Details
It's about the happy escape two women could share

Interestingly, despite a kiss between the leading women, the movie makes no claims about being a one promoting LGBTQ rights. Rather, it just wants to shed light on the happy escape that two women could find in each other. Further, it is never told in the movie whether Krishna and Alia identify as lesbians or bisexuals.

Aarti said, "I really wanted to see two women walking the streets at night absolutely unapologetically." "Being a woman, it's a dream to walk the street at night without having to turn back. I wanted to create a world where my characters could just immerse themselves in the conversations they were having, feel at ease, and enjoy their night," the director added.

Release
When and where can you watch it

Produced by Green Chutney Films, The Song We Sang was scheduled to have its world premiere at the Indian Film Festival of Los Angeles (IFFLA) on April 3. However, the event remains postponed due to the coronavirus pandemic. It is now set to be screened at Kashish Mumbai International Queer Film Festival later this year, and will likely have a digital release after that.