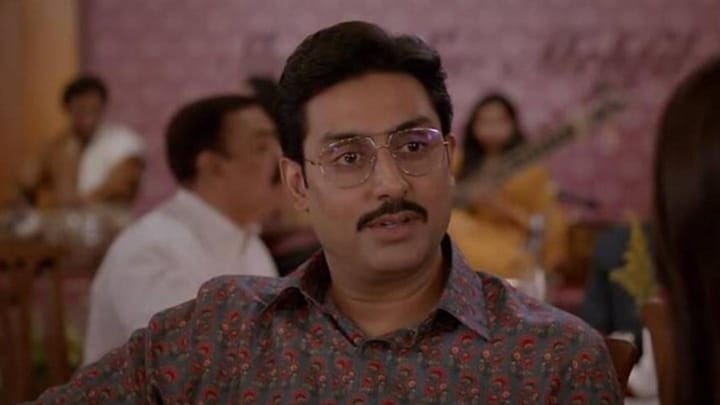 Abhishek Bachchan seems all poised to deliver a Guru-esque performance in his next release — The Big Bull. His character, Hemant Shah, is loosely based on Harshad Mehta, the notorious stockbroker who committed the 1992 securities scam. From the way he walks to how he looks at his opponents, Bachchan shines in every frame of the over three-minute-long trailer. Here's our trailer review.

Corruption in India is exposed right at the trailer's start

This version of the 1992 scam has been directed by Kookie Gulati. The director doesn't even try to show Shah as the righteous one as actor Ram Kapoor's voice in the background sheds light on deep-rooted corruption at the beginning of the trailer itself. Bachchan, with his huge reading glasses, uses this system to get what he wants — money and power.

As the story advances, we see Shah emerge as a formidable force in the stock market. He uses tricks in his book to swell the share prices of NCC (modeled on ACC), offers a gold set to a government employee, and proudly gets himself clicked next to his swanky car. His dream run is interrupted by a journalist, Ilena D'Cruz, determined to expose his fraud.

Even for the fans of Scam 1992: The Harshad Mehta Story, who would have imagined that The Big Bull would be a letdown, the trailer comes as a surprise. Despite not taking original names, the upcoming movie gives an authentic feel. There's drama, romance, power, money, politics, and driving all this is one man who believes he is meant for great things.

The movie will release on April 8

Earlier, Bachchan had a heartfelt exchange with Hansal Mehta, the director of Scam 1992: The Harshad Mehta Story. He told the filmmaker he hopes to touch the benchmark set by his team. After looking at the trailer, we can say that Bachchan has done that. The movie also stars Nikita Dutta and Soham Shah. It will premiere on Disney+ Hotstar on April 8.