'Modern Love' S02: Get ready to break rules for love 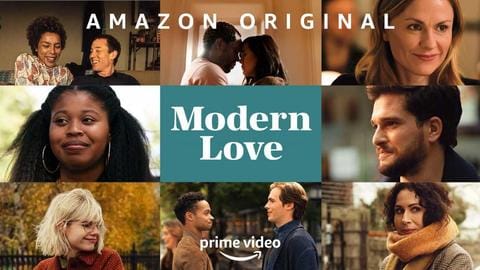 Amazon Prime Video has released the trailer of Modern Love season 2. With a successful run with the first season, the upcoming anthology series has high expectations from viewers. It will feature new actors and eight fresh stories inspired by a column from The New York Times, in which love is set to break all the rules. The season will premiere on August 13.

The trailer shows multiple new characters who are ready to go on a journey of love and heartbreaks. In the video, one can notice first glances, rekindling of relationships, and friends turning lovers, which are inspired by true stories showing different forms of love. Modern Love S02's official synopsis says the upcoming season "brings to life different stories of relationships, connections, betrayals and revelations."

Cast
The star-studded series has Tobias Menzies, Kit Harington among others

Information
Second season has the potential to win hearts

The second season of Modern Love looks promising and has the potential to win hearts like the last one. John Carney is season two's showrunner, who is also the director, executive producer, and writer of one of the episodes. Other directors are John Crowley, Marta Cunningham, Jesse Peretz, and Andrew Rannells, while Logan George and Celine Held will co-helm one of the episodes.

The universal quest for love and acceptance is what the first season was about. It also had eight episodes, which dealt with the honest and painful search for true love. Tina Fey, Dev Patel, Anne Hathaway, Julia Garner, Catherine Keener, and Andy Garcia were among the lead actors in the 2019 series. Patel was even nominated for several awards, including the Primetime Emmy Awards.