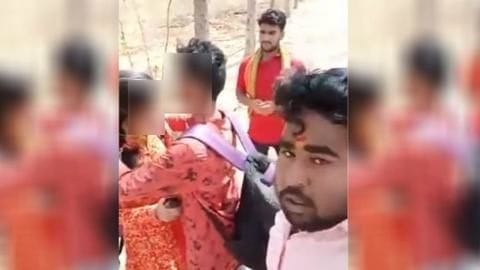 On Valentine's Day, Hindu right-wing activists remained true to their word and spread out in many local parks in India to nab unmarried couples celebrating the occasion. This time they forcibly married a young man and a woman in a park in Hyderabad and also shared a video of the same. However, distressed with the incident, the couple has now gone missing. Here's more.

Details
After forcefully marrying them, activist shakes hands with couple

On Thursday, at the Kandlakoya Oxygen Park in Medchal, Secunderabad, the activists, with red tilaks on their foreheads and stern expressions, forced the man to wrap a pasupu thadu, turmeric-smeared thread used in marriages as mangalsutra, around the woman's neck. One member then shook hands with the couple, and asked them to smile in the video, which was circulated without blurring the duo's faces.

Search
Man was a distant relative of the woman

Thereafter, the video was shown to the 19-year-old woman's father by her relative. He then went to her college where he dropped his daughter that morning but learned that she didn't come to the institution that day. Following this, he went to Oxygen park and came to know that she was with a distant relative, whom the men presumed was her boyfriend.

Arrest
Two people, identified from the video, have been arrested

After failing to find his daughter, the man lodged a police complaint at Medchal police station against the members of the right-wing group for harassment and said the incident caused mental agony to the couple. He also alleged that the men behaved indecently with his daughter. After the complaint, police arrested Mulangiri Srihari Chary and Kunchala Anand, by identifying them from the viral video.

Police are searching for four other accused- Kanuganti Avinash, Pitla Ashok, Barla Suresh Kumar, and Talapuram Chandrasekhar. The accused have been booked under Section 354 (assault or criminal force to woman with intent to outrage her modesty) and Section 506 (criminal intimidation). "We are yet to talk to the girl, the investigation is ongoing," PV Padmaja, Deputy Commissioner of Police, Balanagar, Cyberabad told media.

Other details
One accused is BSP worker; made video to gain attention

One of the men arrested, Chary, 35, belonged to the Bahujan Samaj Party (BSP) and told cops that he made the video to gain attention. "Chary is a local BSP worker. He thought by his act he could become popular, especially among his followers," Padmaja said. She added that the accused were not affiliated with Bajrang Dal and investigation is not completed yet.

Not Bajrang Dal?
Not in our ideology of performing marriages arbitrarily: Bajrang Dal

Claiming that the accused were not from Bajrang Dal, the group's state convener, Subash Chandra said, "We do not have members in Medchal. The activists have used our name to gain attention. It is not in our ideology that we perform marriages in an arbitrary manner." However, the right-wing group did ask several restaurants, malls and pubs to remove decorations for Valentine's Day.

Meanwhile, earlier media reports had suggested that the cops took the activists in preventive custody after the video went viral but no complaint was filed as the couple, who was also interrogated, told the cops that they "willingly" married each other. Further probe is underway.