Here's why Eenam Gambhir is winning internet and our hearts 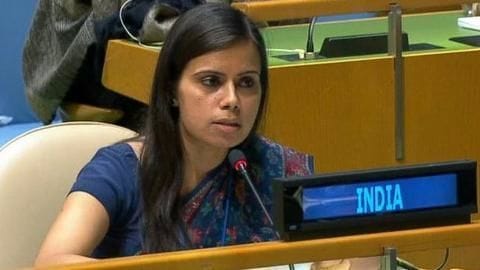 In a spectacular rebuttal, India silenced Pakistan over the Kashmir crisis at the UN General Assembly on Friday. Courtesy Eenam Gambhir, India's First Secretary of the Permanent Mission to the United Nations. Responding to Pakistani PM Shahid Khaqan Abbasi, who held India responsible for the violence in Kashmir, Gambhir highlighted Pakistan's role in boosting global terrorism, and called the nation "Terroristan." Here's more about her.

Exercising India's 'right of reply,' Eenam lashed out, "All Pakistan's neighbours are painfully familiar with these tactics to create a narrative based on distortions, deception and deceit. This august Assembly and the world beyond know that efforts at creating alternative facts do not change reality." She also said that the world didn't need lessons on democracy and human rights from a failed state.

Details
Who is Eenam Gambhir?

Hailing from Delhi, Eenam is a 2005-batch IFS officer. She graduated in Mathematics from DU's Hindu College. She also has a degree from the University of Geneva. She started as the third secretary in Madrid. She then became Indian Embassy's second secretary in Argentina. She was subsequently assigned to the desk at the Ministry of External Affairs responsible for Pakistan, Iran and Afghanistan.

Eenam isn't new to rebutting Pakistani Prime Ministers. At the UNGA exactly a year ago, she had silenced Pakistan's former PM Nawaz Sharif, who had accused India of human rights violations in Kashmir. Back then, she had condemned the transformation of Pakistan from "the land of Taxila" - once a renowned centre of learning - to playing "host to the Ivy League of terrorism".

Do you know?
Eenam's responsibilities as an Indian diplomat with the UN