From CA to Jain monk: Inspirational story of a 24-year-old

Prolific career, impressive educational background, family business having turnover of Rs. 100cr: this is enough to entice any 24-year-old, but not this Mumbai native, who renounced every temptation to become a Jain monk. Mokshesh Sheth, who handled his family business for two years, after becoming a CA in his first attempt, transformed himself to Muni Karunapremvijay Maharaj yesterday at a ceremony held in Gandhinagar.

His affluent family owns JK corporation, which dabbles in diamond, metal and sugar industries, but Mokshesh said he was more inclined to 'audit' the religion and not account books. His uncle Girish Sheth said Mokshesh, eldest of the three brothers, was bit by the bug of monk-hood since he was 15-years-old but 'we convinced him to complete his education first'. 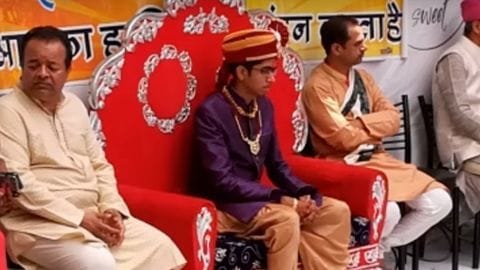 Originally from Northern Gujarat, the Sheths settled in Mumbai 60 years ago and have an aluminum factory in Sangli. "In our 200-year-old family history, Mokshesh became the first man to embrace monk-hood even though five women have become Jain sadhvis," said a beaming Girish, adding that even his 85-year-old father wanted to join Mokshesh but was instead asked to serve his community.

Proud moment
Mokshesh danced with joy when his guru blessed him: Parents

After getting family's consent in January, varshidaan was held on the eve of deeksha, where they donated kits to poor, nests and water-kits to birds. As Jain monk, his chaturmaas- spending the initial 4-months of monsoon at one place- will start on April-22 at Vadodara with his guru Hemchandrasurishwar Maharaj. His parents said Mokshesh danced with joy when his guru blessed him.