Apple 'Peek Performance' event: What products have been launched? 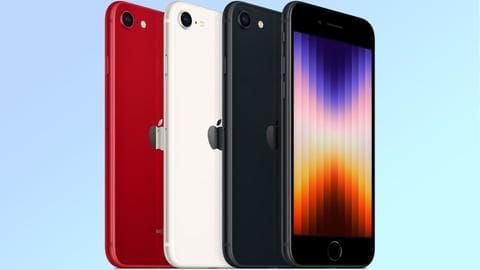 US tech giant Apple held its first launch event of this year, titled "Peek Performance," on Tuesday. The virtual ceremony witnessed the debut of a slew of new products, including the iPhone SE 3 (2022), iPad Air 5, Mac Studio, Apple Studio Display, and the Apple M1 Ultra chip. However, the 27-inch iMac has been axed. Let's have a detailed look at the products.

The iPhone SE 3 has an IP67-rated metal-glass body with a 4.7-inch Retina HD screen and a Touch ID fingerprint scanner. It sports 7MP front and 12MP rear snappers, packs an A15 Bionic chip, can store up to 256GB of data, offers 5G connectivity, and promises to deliver an "all-day battery life." It will be up for grabs from March 18.

The iPad Air (2022) flaunts a 10.9-inch LED-backlit Liquid Retina display, a power button with a built-in Touch ID sensor, an octa-core M1 chipset, and 8GB of RAM. It offers 64GB/256GB of storage, 12MP snappers, and support for Apple Pencil (2nd generation). Moreover, 5G connectivity and "all-day battery life" are promised. It is available in five shades; bookings will start here on March 11.

Mac Studio is a desktop made of aluminium and has smaller proportions compared to Mac Pro. However, it is over 3x faster than Mac Pro. It is equipped with M1 Max/M1 Ultra processors, up to 128GB of RAM, and up to 8TB of SSD storage. Numerous ports, including USB Type-C, Thunderbolt, 10Gb Ethernet, and USB-A are available. Wi-Fi 6 and Bluetooth 5 are supported.

The Apple Studio Display sports a 27-inch 5K screen with super-wide viewing angles, a 12MP ultra-wide camera, and a six-speaker system with Dolby Atmos. It is fueled by an A13 chipset that can handle certain processing tasks natively and packs one Thunderbolt port and three 10Gbps USB Type-C sockets. Also, the device can be paired with an Apple Magic Keyboard with Touch ID.

Product #5
M1 Ultra processor: The fastest one yet

Finally, Apple has added a new chipset to its family called M1 Ultra, which claims to be eight times faster than the company's M1 processor. It utilizes an UltraFusion multi-die architecture with 2.5TB per second of bandwidth. Also, the processor has up to 128GB of unified memory, a memory bandwidth of 800GB per second, a 20-core CPU, and a 64-core GPU.