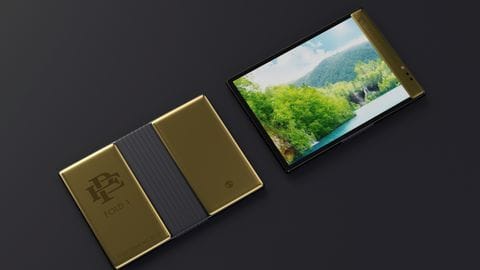 The brother of infamous Colombian drug lord Pablo Escobar has taken up selling smartphones. Yes, as hard as it may seem to believe, Roberto Escobar has actually released 'Escobar Fold 1', a $350 worth device, which he says is foldable and 'unbreakable'. And, interestingly, he hopes to challenge tech giant Apple with this device. Here's more about it.

Available on Escobar Inc. website, the new Escobar Fold 1 features a flexible 7.8-inch screen that folds outwards to change between the form of a tablet and phone. Apart from that, you get Android 9, Snapdragon 8-series processor as well as two 16-megapixel and 20-megapixel cameras. The website even says the phone is unlocked and works with all networks around the world.

Ambition
Plans to beat Apple with this device

In a conversation with Digital Trends, Escobar said he hopes to beat Apple with this device. "I have told many people that I would beat Apple and I will," Escobar said. "I cut the networks and retailers, to sell to customers phones that can fold for only $349, phones which in stores cost thousands of dollars by Samsung and others."

Lawsuit
And, guess what, Escobar will sue Apple for $30 billion

Adding further, Escobar said that he plans to slap Apple with a class-action lawsuit for $30 billion. "They are scammers, and now we are preparing the class-action lawsuit," he said, adding that he has already invested $1 million only to hire lawyers for the suit, which will be filed on January 6, 2020, in the courts of California.

Quote
But, first, he wanted to show his phone was better

"They are cheating people and selling worthless phones to consumers, overpriced," Escobar added. "My lawyers have been ready for long..., but before I sue them and give money back to the people which they deserve, I wanted to show my product is much better."

Details
Escobar Fold 1 being flaunted with a touch of luxury

Escobar touts the phone is hard to break as its screen has been made with "a special type of plastic" and it also features special security features, including "a thin layer of metal", to block unauthorized Bluetooth-scanning, government access, or RFID communications. Meanwhile, his website flaunts the phone with all the bells and whistles, including fancy images showing the phone with Pablo Escobar's wallpaper.

Information
Honestly, this is nothing but a re-branded Royole FlexPai

We wish Escobar luck with Fold 1. But, tech buffs already know, both from the specs and design, that this is just a re-branded avatar of FlexPai, the first-ever foldable smartphone introduced by a company named Royole.