Home / News / Sports News / WWE: Who is the mystery attacker of Roman Reigns?

WWE: Who is the mystery attacker of Roman Reigns? Roman Reigns is a top draw in WWE and the promotion would be pushing hard to find a suitable opponent for him at SummerSlam in the best possible manner. This week on SmackDown Live, he was attacked by a mystery man at the backstage, as the stage equipment collapsed on him, while he narrowly escaped being hurt. Who is this mystery attacker? We analyze.

The Samoan connection and supremacy The obvious name that comes to one's mind is his recent opponent, Samoa Joe. While Reigns pinned Joe clean on Raw last week, it turned out to be an all-out brawl this week on Raw, where Reigns was again the last man standing. Going by Joe's nature, it is certain that he would not sit ideal until he gets his hand on Reigns, again.

Now, this might come as a surprise, but rumors have been doing the rounds that Buddy Murphy could be the man. The primary reason for this is that he was seen lurking in the backstage around the area where Reigns was attacked. While Murphy is on 205 Live, the cruiserweight division, it is common for them to challenge superstars in the main roster.

Is this the career-altering decision?

For weeks, the new Daniel Bryan has been teasing a career-altering announcement that could bring him back on track. However, he is yet to make that announcement. He was given a chance this week on SmackDown, but did not mention a single word. Thus, chances are that he could possibly make a statement by attacking The Big Dog to reignite his career.

Moving on to the outside chance, it could very well be possible that Goldberg could issue a challenge to Reigns. Goldberg has admitted that he was unhappy with his last performance against The Undertaker at Super ShowDown. As a result, in order to mend it, he could challenge The Big Dog to prove that he is still a force in the ring.

The Dead Man wants his yard back 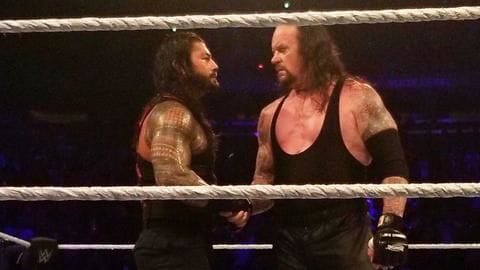 One can never say anything with certainty when it comes to The Undertaker. Reigns pinned him clean at WrestleMania 33 to take over the yard. Undertaker also returned at Extreme Rules to aid Reigns against Shane McMahon and Drew McIntyre. However, it is possible that The Dead Man could have other motives. It won't be a surprise if he's the one who attacked Reigns.