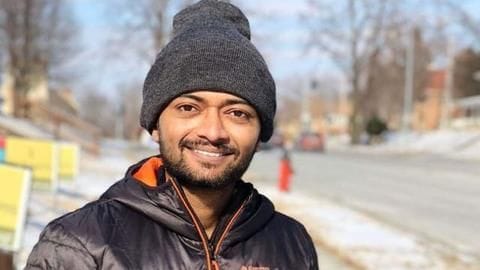 Kansas Police have released CCTV footage of the suspect who shot to death Indian student Sharath Koppu Friday evening. They have also announced a reward of $10,000 for information leading to his arrest. Koppu, a student of University of Missouri-Kansas City (UKMC), was working at J's Fish and Chicken Market on Prospect Avenue. Reports said he was shot dead during an attempted robbery.

In this article
Murder

Suspect apparently shot Koppu when he tried to run

According to witnesses, a man wearing a brown shirt with white stripes entered the restaurant sometime before 7pm, pulled out a gun and demanded money. The few workers and customers present there ducked, but Koppu suddenly bolted away from the gunman, towards the back of the store. That was when the suspect shot him. He was rushed to hospital, but was declared dead.

Tributes pour in from several quarters

Tributes poured in from all quarters. "Sharath and I share Indian heritage, but all at UMKC share in the grief," tweeted UKMC Chancellor C. Mauli Agrawal. "Sharath will be missed not only by his family, but everyone whose life he touched," wrote his cousin Raghu Chowdavaram. Chowdavaram also created a GoFundMe account to help Koppu's parents bring his body home. It has collected $51,000.

We will provide all assistance to the family: Sushma Swaraj

External Affairs Minister Sushma Swaraj has meanwhile assured all help to the grief-stricken family. "Kansas incident - My heartfelt condolences to the bereaved family. We will follow this up with the Police and provide all assistance to the family," she tweeted.

Koppu had moved to the US only this year

Koppu, hailing from Warangal in Telangana, had completed his studies from Hyderabad's Vasavi College of Engineering and was working as a software engineer in the city. In January, he moved to the US for his Masters. People having any information on his murder can call on the TIPS Hotline at 816 474 8477 or visit www.kccrimestoppers.com.