Amitabh Bachchan, SRK to promote 'Badla' in a unique way

Veteran actor Amitabh Bachchan is gearing up for the release of Badla opposite Taapsee Pannu on March 8. The movie is produced by superstar Shah Rukh Khan, who will also have a cameo in the movie. Interestingly, the Badla team came up with a unique promotional strategy, wherein they will be releasing short videos of riveting conversations between Big B and SRK. Here's more.

In this article
Tribute

Amitabh and SRK give an ode to each other

Notably, the first promotional video was unveiled yesterday, which featured SRK quizzing Bachchan about his first acting role, his Bollywood journey, and Khan's admiration for him. The team released another video today wherein SRK paid a tribute to Bachchan with a video collage of all his iconic films. In return, Bachchan also surprised SRK with a montage of hilarious scenes from his movies.

Amitabh, SRK to entertain audience with their fun banter

Further, the Badla team will be releasing more videos of SRK and Amitabh's engaging conversation while promoting their movie. The audience will surely love the fun banter between these two in the next few episodes of the show, Badla Unplugged.

This is Amitabh and SRK's first collaboration as actor-producer

Badla will mark Bachchan's second collaboration with Taapsee after their critically acclaimed movie Pink, which released in September 2016. Besides, it will also mark the veteran actor's first association with Shah Rukh as an actor-producer. Meanwhile, SRK and Bachchan have shared the screen space in several movies like Mohabbatein, Kabhi Khushi Kabhie Gham, Veer Zaara, Kabhi Alvida Naa Kehna and many more.

'Badla' trailer is intriguing; talks about a murder, blackmail 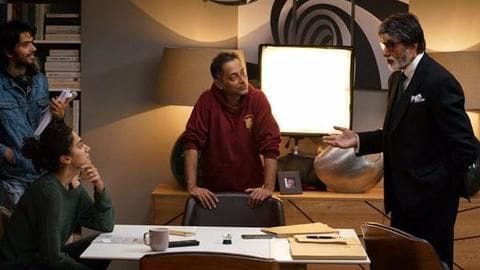 The intriguing trailer of Badla has created much excitement among the audience making them curious and amazed. Badla presents the story of a woman struggling to find out the truth after a murder and blackmail. The glimpses of the trailer give sneak peek into the gripping mystery that revolves around a murder, blackmail and no witnesses, leaving Taapsee as the main suspect.