#BiggBoss12: Jasleen's father opens up on her pregnancy, abortion reports 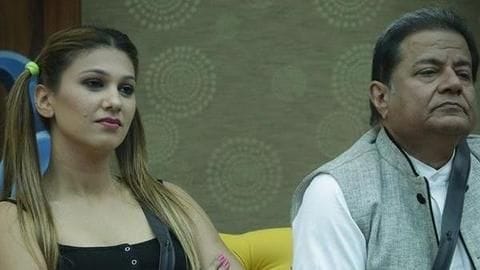 The buzz around 'Bigg Boss 12' couple Anup Jalota and Jasleen Matharu never fail to entertain/surprise us. The couple, that grabbed the headlines for their onscreen break-up recently, also created a buzz when reports of Jasleen's pregnancy surfaced online. Notably, the claims about her pregnancy and abortion were made by a model. Now, Jasleen's father has finally opened up. Here's what he said.

Jasleen's father Kesar Matharu, who has been openly opposing her affair with Anup, rubbished the reports of her pregnancy. He even slammed the model for making false claims and asked her to prove her statement. Kesar also mentioned that how can someone make such allegations without any evidence. He urged the media not to carry such fake news as they are baseless.

In an interview, a model claimed to be a witness of Anup-Jasleen's massive fight over the BB12 contestant's pregnancy. "Jasleen claimed the pregnancy was due to Jalota's carelessness, which was refuted by the Bhajan King," the model reportedly stated. She also mentioned that this verbal spat left Jasleen quite disturbed after which she aborted the child. It was indeed a shocking revelation.

On the other hand, love has once again found its way in Anup-Jasleen's life. Reportedly, the couple will be seen resolving their differences in the coming episode. This is not all. They will also be seen dancing on 'Sanso Ko Sanso Mein Dhalne Do Zara', where the Bhajan singer will go down on his knees for his lady love. Too filmy, isn't it?