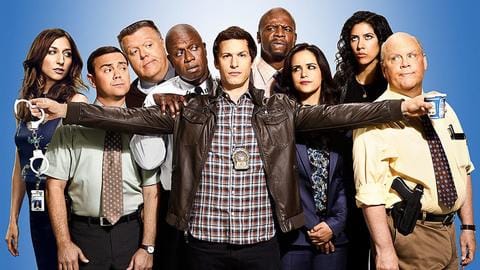 "One last ride" for all Brooklyn Nine-Nine fans! The most loved police procedural sitcom released a trailer for its 10-episode-long last season recently. Andy Samberg as Jake Peralta and Joe Lo Truglio as Charles Boyle return to the series as detective partners, one last time. Besides, Dirk Blocker as Michael Hitchcock and Joel McKinnon as Norm Scully will be in the limelight this season.

Charles is scared of thinking that one day he and Jake will have to part ways as partners. When that happens, there will be no stakeouts, no drinks after long shifts, and no midnight calls, after achieving a breakthrough in the case. Charles always dreamed of hunting criminals with Jake even after their retirement. Now, he calls those dreams to be "dumb fantasy."

New-phase
Will Amy and Jake successfully manage child and work together?

Melissa Fumero as Amy has entered a new phase of life along with Jake, being mom and dad. They will face difficulties adjusting to their childcare and office routine together. The funny part of the trailer was where both shout at each other, "You're supposed to be getting Mac from daycare!" Slowly, the couple gets pro in managing both, child and job.

Details
George Floyd's murder had altered the output a bit

"The hilarious heroics of New York's funniest police precinct continue for a new season, with a brand-new home," says the synopsis. The season eight was announced in February this year, and that's when NBC confirmed that this edition will be the last. Creators Michael Schur and Dan Goor brought a change to the output of the show in the wake of George Floyd's murder.

Plan
The first two episodes will release on August 12

As a result, Goor canceled four "ready to go" episodes, said Terry Crews, who plays Terry Jeffords, a Lieutenant, on the eight-year-old show. COVID-19 pandemic will also be covered in season eight, which will release its first two episodes, named The Good Ones and The Lake House, on August 12, 2021. Rest of the episodes will release on a weekly basis.