'Doctor Who' S13 trailer indicates the Doctor is hiding something 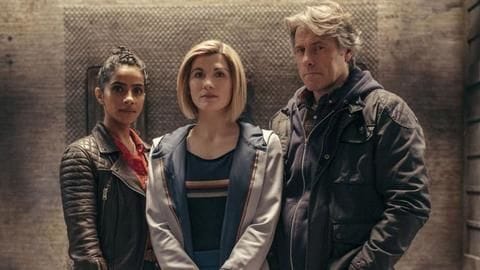 Doctor Who is back! The trailer of the new season was dropped at San Diego Comic-Con@Home panel, which was attended by Jodie Whittaker, who plays the titular character, and her companions. Set to release later this year, the show has old faces, along with a few new ones. John Bishop's character is about to hold a lot of importance. Let's take a look.

Trailer
The present, past, and future would collide in this 'adventure'

"Her biggest adventure yet," says the less than a minute-long teaser. The time and space hustle will continue. Also, the teaser reveals a corridor for run-away and fall-down. Past, present, and future travel and threats will undoubtedly continue. Mandip Gill's Yasmin Khan says at the end of the teaser to Doctor, "You are hiding something." Further, Doctor's eyebrow-raising face tells something mysterious is cooking.

Bishop joins the cast as Dan Lewis, Doctor's new companion. He said at Comic-Con, "If I could tell my younger self that one day I would be asked to step on board the TARDIS, I would never have believed it." However, now his dream surely has come true. The next chapter of Doctor Who will start with Lewis, making him an important character.

Addition
A few characters exit the show, some new come in

Jacob Anderson is the new addition to Doctor Who, introduced as the character, Vinder. He comes in after Bradley Walsh and Tosin Cole's exit. Alongside other guest stars, Anderson will play a large part in many episodes. He had shot to limelight after he portrayed people's favorite character Grey Worm, who was one of the main advisors to Daenerys Targaryen, in Game of Thrones.

Premiere
'Doctor Who' season 13 will release this year

Doctor Who Season 13 is still in production. Unlike prior seasons, this season will tell a singular story, after picking up from the Revolution of the Daleks. This science fiction drama from BBC One will have a shorter episode count in Season 13. Doctor Who season 13 will release in later half of this year. The exact date is yet to be announced.