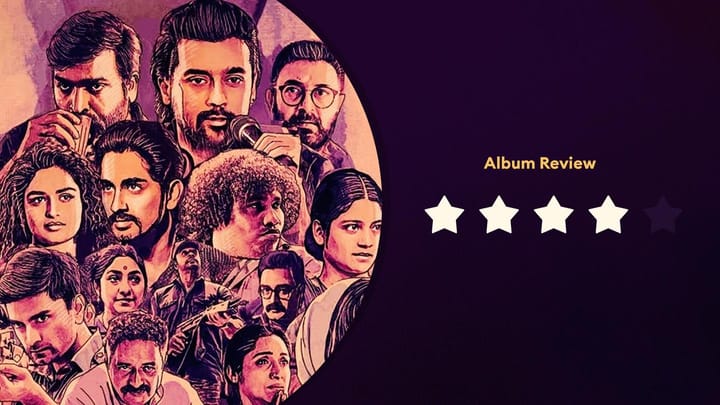 The much-anticipated Tamil anthology series, Navarasa, has made fans curious about the nine stories, ever since its trailer got released. This project has been helmed by nine renowned directors and as per the audio jukebox released online, the series will feature nine songs. Backed by Mani Ratnam and Jayendra Panchapakesan, it has wonderful tracks composed by five talented music composers. Here's our album review.

Suriya's portion has the maximum songs from the album

Singer Karthik has turned into a music composer for Navarasa. He has sung and composed four songs for Suriya's part — Guitar Kambi Mele Nindru. This musical story will feature Kamal (Suriya) and Nethra (Prayaga Martin) falling in love. If you're a romance enthusiast, add these meaningful and foot-tapping tracks to your playlist — Thooriga, Alai Alaiyaaga, Naanum and Adhirudha - right away.

Sarjun KM-directorial Thunintha Pin, which will depict "courage," has two beautiful songs, which have been composed by Sundaramurthy KS and written by Soundara Rajan. The Bleeding Heart (Osara Parandhu Vaa), sung by Vrusha Balu, and The Comrade Theme (Dhooramai Kanaa) by Udhay Kannan, are set to give you goosebumps. While the first track hits the right spot, the other track is high-pitched yet powerful.

The next track, Yaadho (Edhiri) is a slow melodious track of the short, which will feature Revathi, Prakash Raj and Vijay Sethupathi. It deals with the emotion — Mercy. Chinmayi Sripada's voice in this Govind Vasantha composition is a treat for your ears. Next in line, Justin Prabhakaran's Kannunjal (Payasam), sung by Sudha Ragunathan, has classical beats and brings out the emotion — Disgust.

The theme song by AR Rahman is beautifully composed

Lastly, the theme song of Navarasa has been created by Ratnam's favorite composer, AR Rahman. The music maestro has nailed it once again, as the track has the ability to intrigue, and it blended perfectly with the trailer, which released today. Overall, the songs are well composed. Verdict: 4 stars for album review. Navarasa is set to premiere on Netflix on August 6.