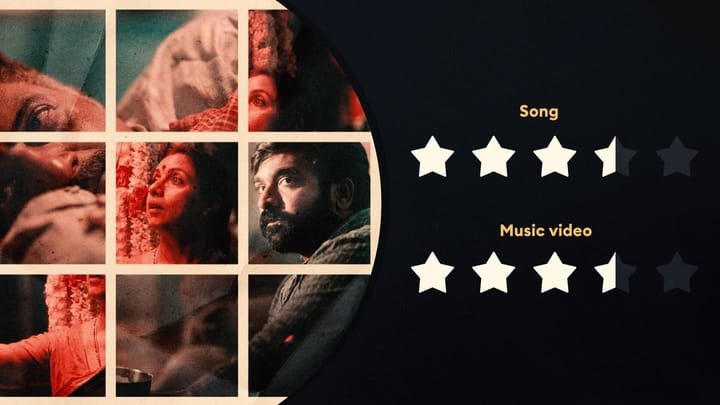 A new melodious track, Yaadho, from Navarasa is now out. Makers released its lyrical video on YouTube, featuring pictures of Revathy, Vijay Sethupathi, and Prakash Raj donning different expressions. This song hits the right spot and is a treat to your ears. The nine-part anthology is produced by Mani Ratnam and Jayendra Panchapakesan. This soulful melody is from Edhiri—the story directed by Bejoy Nambiar.

The video is filmed as a slideshow of photo collages. In the beginning, a sad-faced Revathy and Sethupathi's pictures are displayed, leading to the latter's annoyed and angry images. Then, it shows three photos — two of Raj's (one in deep thought and the other, displaying an evil smile) and one of Revathy's. All the actors show different emotions in this impressive video.

The pace of the song is extremely slow yet melodious

Like old songs, Yaadho also begins with a stretched music and the first line can be heard after one minute and 35 seconds. It has a classical touch, which beautifully fits in. Although the pace is extremely slow, the melodious song touches your heart. Chinmayi Sripada's voice brings out the emotions well. It is nicely composed by Govind Vasantha and written by Karky.

Song from Suriya's story was released before 'Yaadho'

Recently, the makers had released the first single named Thooriga from the anthology series. It is part of the story, titled Guitar Kambi Mele Nindru, starring Suriya. This is a melodious track and its chorus is instantly likable as well. After Thooriga and Yaadho, the third track from Navarasa, titled Kannunjal from Payasam, the portion directed by Vasanth, was released.

'Yaadho' is perfect for slow song lovers; gets 3.5 stars

Navarasa has created hype since its poster dropped on social media. It is set to premiere on Netflix on August 6. With nine directors and multiple talented actors, the highly-anticipated series is already winning hearts with its melodious songs. Sethupathi, Revathy, and Raj's Yaadho also received a positive response, especially from slow song lovers. Verdict: 3.5 stars for song and music video each.