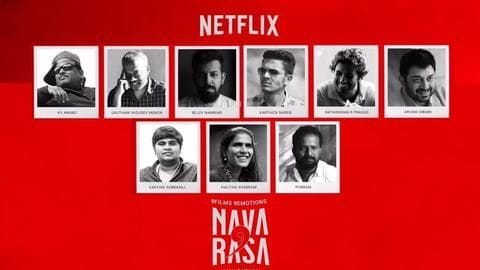 Netflix is gearing up to premiere the nine-part anthology Navarasa on August 6. Produced and presented by directors Mani Ratnam and Jayendra Panchapakesan, the nine stories will deal with our nine emotions: Anger, compassion, courage, disgust, fear, laughter, love, peace, and wonder. Notably, all proceeds from the film will go to help those affected by the COVID-19 crisis in the Tamil cinema industry.

Makers dropped an introductory teaser clip earlier today to announce the date of the film. The 156-second-long clip is bone-chilling and raw, as Suriya, Siddharth, Vijay Sethupathi, Prakash Raj, Revathy, Nithya Menen, Parvathy Thiruvothu, Aishwarya Rajesh, and Arvind Swami among others, emote various rasas of human emotions. The masterclass in acting paired with intense instrumentals composed by AR Rahman is an audio-visual delight!

Information
Many icons of the industry offered services pro-bono

Other members of the cast include Saravanan, Alagam Perumal, Poorna, Riythvika, Prasanna, Vikranth, Simha, Gautham Karthik, Ashok Selvan, Robo Shankar, Ramesh Thilak, Sananth, Vidhu, and Sreeram. In order to realize "the emotional journey of an industry coming together to support its people," many industry icons have offered their services pro-bono, according to Netflix. As is understood, the movie was shot during the pandemic.

Quote
The project has been spearheaded by Ratnam and Panchapakesan

The nine movies have been directed by Swami, Bejoy Nambiar, Gautham Vasudev Menon, Karthick Naren, Karthik Subbaraj, Priyadarshan, Rathindran Prasad, Sarjun, and Vasanth Sai. Speaking on the project, Ratnam explained they were thinking of ways to help daily wage workers when this idea emerged. Panchapakesan said, "Life is all about navarasa; more so during the pandemic when people go through all kinds of emotion."

When asked which emotion was the hardest to portray cinematically, Ratnam said, "All of them! In Navarasa, each segment depicts a particular emotion, but it will be in contrast with the rest of them." Finding the right story for "disgust" took the longest, noted Panchapakesan.

Suriya and Prayaga Martin are reportedly going to lead Menon's short film titled Guitar Kambi Mele Nindru in the anthology. Some stills from the romantic story were released earlier and one of them went viral online. Wearing a headband, Suriya flaunted comparatively longer hair as he had an earphone plugged in one ear. Martin, staring at him in adoration, had the other chord.