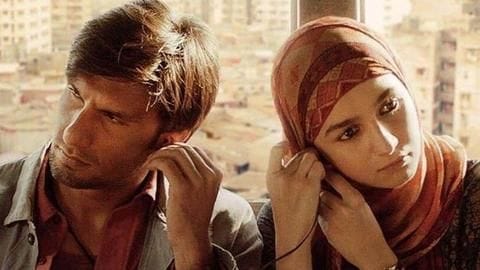 Gully Boy is the upcoming film directed by Zoya Akhtar, and marks the first collaboration between the hugely talented Ranveer Singh and Alia Bhatt. The film, based on real Indian rappers, has been categorized as a musical drama. The filmmakers decided to announce the trailer's release date in an interesting way through a hip-hop song that has us tapping our feet. Read it here.

For those unaware, Gully Boy is based on the life of street rappers Naved Shaikh aka Naezy and Vivian Fernandes aka Divine, known for their song Mere Gully Mein. The trailer will release on January 9, 2019, and the film on February 14, 2019.

The video starts off with a really cool beat-boxing track as the film tries to take us back to old-school hip-hop. Ranveer's character represents the voice of the streets as his angst is evident in his rap, where he claims his voice cannot be silenced. We also see romance unfurl with both Alia's and Kalki Koechlin's characters, against the backdrop of Indian hip-hop culture.

The song in the trailer is Asli Hip Hop and introduces India to hip-hop culture in the mainstream for the first time. We hear the pain and struggle behind the lyrics crooned by Ranveer himself, as he dreams of rap taking him to greatness. Being an underground rapper, he likes to break society's rules, which the video shows through graffiti and hints of vandalism.

Alia's character
Alia appears quiet, but has a wild side

Alia's character is introduced as a quiet woman, which puts her at odds with Ranveer's rule-breaking character. However, the trailer quickly shows that she is pretty 'street' herself, as she breaks a beer bottle on someone's head, and is shown being physically dragged away from an altercation. It will be interesting to see how the Alia-Ranveer-Kalki relationship dynamic plays out in the movie.

Ranveer usually plays larger-than-life characters in films like Padmaavat, Simmba. It is refreshing to see his grounded role, a struggling hip-hop artist, perhaps afraid to confront his parents about his career choice. The characters are introduced well, and we saw hints of rap battles, which has this writer excited about the trailer and movie. We are about to witness the power of street knowledge!