In age of tasteless remakes, 'Hanjugam' feels like a blessing 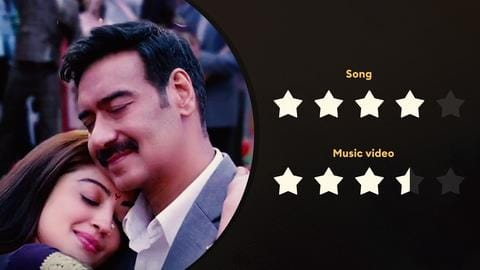 Makers dropped the first video song Hanjugam from Ajay Devgn-led Bhuj: The Pride of India earlier today. The sweet romantic number has been composed by Gourov Dasgupta and sung by Jubin Nautiyal. Picturized on Devgn and Pranitha Subhash, the lyrics for the track have been penned by Devshi Khanduri. So how did the melodious tune fit in/complement the war movie flavor? Let's find out.

Voice, music, lyrics: The song scores on every sphere

Nautiyal's soothing voice and soft instrumentals slowly draw you in, as Devgn professes his love to Subhash. The chorus is the best part, where the speaker wishes he could take away his lady love's sadness, in exchange of giving his laughter ("Tu Hanju Mainu Dede, Hansi Meri Tu Laija"). Among the current abnormal craze for recreating old classics, this song feels like a blessing.

'Cherish the feeling of being in love with #Hanjugam'

Cherish the feeling of being in love with #Hanjugam. Song out now!

The official video track goes back and forth from the celebration, where the song is being sung, to the battle scenes. We understand Hanjugam takes place inside the armed forces' residential area and it could be Valentine's Day/wedding anniversary celebration, if the red balloons are to indicate anything. It signifies the normal before the agony of war, as bombing starts by the song's end.

We clearly see why Devgn reshot the love ballad

Devgn is a seasoned actor, and his chemistry with the actress is impressive, not a surprise there. To note, director Abhishek Dudhaiya had already shot the video with a different ballad, but when Devgn heard Hanjugam, he immediately demanded it be included in his period war movie. They reshot the sequence later, much to the composer's elated surprise. And, we're glad they did!

The music absolutely works in favor of the team, while the accompanying video is pure Bollywood, with no new elements. Verdict: The song gets 4, while the video gets 3.5/5. Based on a real-life incident during the Indo-Pak War of 1971, Bhuj will also star Sanjay Dutt, Sonakshi Sinha, Ammy Virk, Nora Fatehi, and Sharad Kelkar. Catch it on Disney+ Hotstar on August 13.