Kamala Harris has been chosen as the running mate for Democratic presidential nominee Joe Biden, and celebrities can't keep calm! Many talk show hosts, including Trevor Noah, Jimmy Fallon and Stephen Colbert, have dramatized their excitement about Harris being the first woman of color to be given such an important ticket, through their humorous shenanigans. Naturally, President Donald Trump was drawn into their equations.

Noah
'This isn't a VP pick, this is an insurance policy' 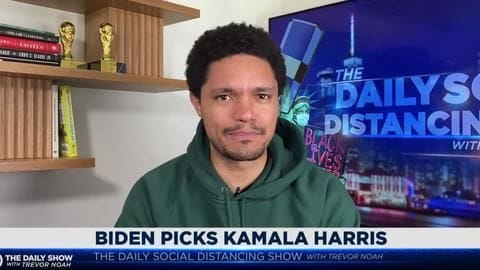 Let's start with what Noah had to say. This comedian began with a swipe on how Trump would react after hearing the news of Harris getting chosen for this position. Expressing his surprise at the selection "even after she destroyed him at that [Democratic] debate," he cheekily added, "part of me thinks this isn't a VP pick, this is an insurance policy."

Information
Has Biden chosen Harris for her killer debating skills?

The Democratic debate Noah is referring to happened last June. In that, Harris went all ballistic against Biden on the issue of race. She said his version of segregationist senators was "very hurtful." Her killer debating skills will definitely be an asset for Biden.

Humor
Next up: Fallon, Colbert join in with their fun!

Then came Jimmy Fallon, aping Biden with a wig and fake eyebrows, and chatting with four fictitious people on a Zoom call, imagining how Biden would have Zoom-called Harris to inform that she was chosen. Stephen Colbert pulled off a Biden with his Aviator glasses and said choosing Harris was a surprise as she went with "hammer and thongs" against Biden in that debate.

Not only talk show hosts, Hollywood stars are also supporting Harris pretty openly. Charlize Theron said, "We've got our ticket, now it's up to us to VOTE," while supermodel Tyra Banks said she is proud of her (Harris). Singer Pink said both Biden and Harris have her vote, while John Legend wished 'friend' Harris to recover the US from a 'nightmare presidency'.

Born to an Indian-American mother and Jamaican-American father, Harris is the first woman of color to run for vice president on a known party's ticket. Her ferocious jab at Biden during the debate last year was termed "disrespectful" by current President Donald Trump. She, however, would back Biden's debating skills with her own as she faces Vice President Mike Pence.