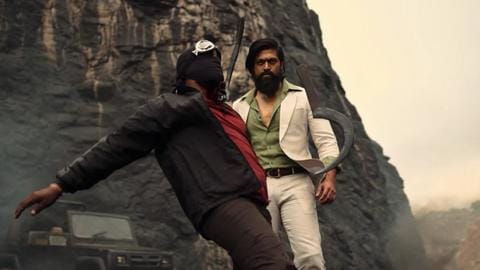 The much-awaited trailer of KGF Chapter 2 is here! Makers of KGF: Chapter 1's (2018) sequel finally dropped its theatrical trailer on Sunday. Notably, the film is slated for release on April 14. To recall, a teaser of the actioner was released back in January 2021. As its release date nears, the team is leaving no stone unturned to promote the movie across India.

The trailer opens with a voiceover that asks, "What happened in KGF after Garuda's death?" Then, several characters make blink-and-miss appearances and we see Raveena Tandon as India's Prime Minister and Rocky Bhai's new enemy: Sanjay Dutt's Adheera. Around the 1:20-minute-mark, Yash's Rocky makes a swaggy entry. We also spot Srinidhi Shetty in it. The clip—peppered with magnificent visuals—reveals the film's top-class production value.

Information
Trailer released in these 5 languages

To note, the upcoming film directed by Prashanth Neel will be released in five languages: Kannada, Telugu, Tamil, Malayalam, and Hindi. So, the trailer was released in all these languages as well. Moreover, the 2:56-minute-long trailer has successfully established the film's lead character Rocky and the main antagonist Adheera pretty well. The makers had released its first single, titled Toofan, earlier this month.

Details
Meet the cast and crew of the film

In the second installment of the KGF franchise, Shetty reprises her leading lady role. And, as mentioned before, Tandon plays Prime Minister of India, Ramika Sen. Acclaimed actors like Prakash Raj, Achyuth Kumar, Malavika Avinash, and Easwari Rao will also be seen playing key roles. Bhuvan Gowda has cranked the camera for the period drama, which is bankrolled by Vijay Kiragandur under Hombale Films.