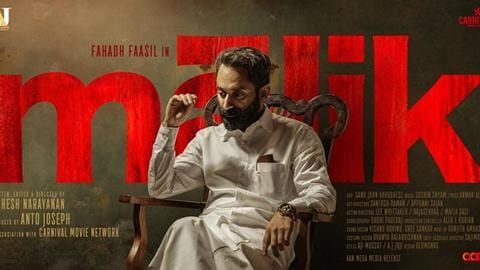 Amazon Prime Video made Fahadh Faasil's fans happy by releasing the most-anticipated trailer of Malik. The Malayalam film features Faasil as Sulaiman Malik, and shows his journey from a local goon to a revolutionary leader. It's about crime, politics and conspiracy. The Mahesh Narayanan-directorial also stars Nimisha Sajayan, Joju George, Vinay Forrt, Jalaja and Dileesh Pothan. It's slated to premiere on July 15.

What is the trailer about?

"He almost died when he was six-year-old. I wish he had died then!" The video begins with a woman's voice saying these lines, a boy sitting at beach, while a child is getting buried. The next shot shows violence, leading to the lead character Malik, rising as the charismatic leader of Ramadappally. Trailer gives a glimpse of the film that's going to be action-packed.

We see Faasil in three versions of his character

We further see a younger Malik, who gets involved in local politics to protect land. The next is gangster Malik, who feels no remorse while confessing to a murder, "We killed Chandran. We chopped him up and threw him into the sea." Lastly, the older version, who's in prison and calmly prays five times a day, while plans of killing him are being made.

Netizens call it a 'controversial superhit'

National Award-winner Faasil has a huge fan base, and ever since his movie trailer got released, netizens can't keep calm. A fan wrote, "This is going to be a controversial superhit," while another wrote, "Whenever there is Fahadh Faasil, there is a blockbuster." While the trailer is receiving positive responses on social media, the YouTube video crossed 8 lakh views within 5 hours.

Pandemic made it difficult for a theatrical release

Produced by Anto Joseph, Malik was booked for May 13. However, the second wave of COVID-19 forced the makers to cancel theatrical-release of the film. Addressing the change, Faasil said in a statement that their "ambitious project" will have an OTT release. "Unlike my recent OTT releases which were planned for home viewing right from the beginning, Malik was designed for a theatrical experience."