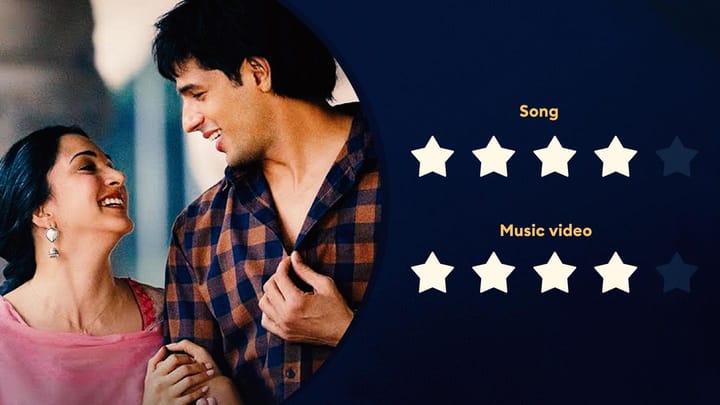 Producer Karan Johar has dropped the first song, titled Raataan Lambiyan, from his upcoming movie, Shershaah. Starring Sidharth Malhotra and Kiara Advani, the romantic track is about the love story between Kargil hero Captain Vikram Batra and his fiancee, Dimple Cheema. Directed by Vishnu Varadhan, the Dharma Productions movie is slated to premiere on Amazon Prime on August 12. Here's our song/video review.

The video begins with Malhotra reading Advani's letter at his Army camp. She reminds him what happened on February 11, which takes you to flashback scenes between the two. It shows how they fell in love, their hush-hush phone calls, movie outings with friends, holding hands and slowly we get to know it was the date of their first kiss. Their chemistry is spot-on!

This song would make you miss your beloved

Crooned by Jubin Nautiyal-Asees Kaur, the song has been wonderfully composed/written by Tanishk Bagchi. It's about missing your loved one dearly and finding it difficult to spend your day without him/her. The hook line, which translates to "the long nights are meant to be spent with you," will make you miss your beloved. Bagchi's composition, especially the chorus, will sure give you goosebumps.

Netizens hailed Nautiyal for lending his voice to this song

The song has impressed netizens, as they called the chemistry between Malhotra and Advani's characters, "pure love." Many praised the Ek Villain actor in it, while a user raised eyebrows by saying, "Their offscreen chemistry got reflected in the screen." Also, they lauded the talented singer, Nautiyal, for lending his voice to the first track of this film and making it a success.

Within just 20 minutes of release, its YouTube video crossed one lakh views. Johar shared the song on social media with the caption — "The feeling of 'pehla pyaar' is special - especially when it lasts beyond a lifetime." Honestly, the song does bring out that special emotion, and credit goes to the singers and the lead actors. Verdict: 4 stars (song and MV).