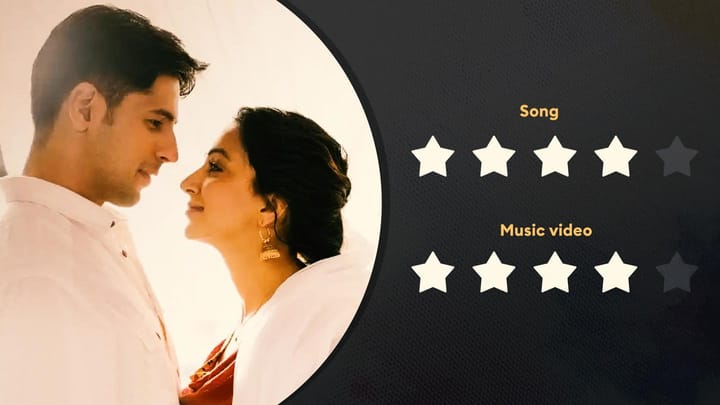 Before Shershaah drops on Amazon Prime on August 12, makers released the second song from the period film. Featuring lead stars Sidharth Malhotra and Kiara Advani, Ranjha narrates a melancholic tale, with the video describing the last moments spent together before your partner leaves to serve the nation. Sung by B Praak and Jasleen Royal, it has been composed by her. Here's our review.

The lyrics, penned by Anvita Dutt, paint a heartbreaking picture that would suit every forlorn lover. The lines, "Chup Maahi Chup Hai Ranjha, Bole Kaise Ve Na Ja (Both Maahi and Ranjha are mum, how do you say don't go)," hit you right in the feels. Akshay Raheja's arrangement and production are fitting. Royal's husky, airy voice works magic with B Praak's commanding tone.

Malhotra and Advani's chemistry mesmerizes in the clip

The accompanying video is a little over three minutes and Malhotra-Advani mesmerize you with their flawless chemistry. Right before Malhotra, who plays Captain Vikram Batra in the film, has to leave on his posting, he spends some moments with fiancée Dimple Cheema (Advani). Moments like Advani's wistful smile or Malhotra trying to cheer her up, reflect the reality of military couples.

Royal was in 'very emotional state of mind' while recording

Royal, who has composed songs like Din Shagna Da, Kho Gaye Hum Kahan before, had earlier shared her experience of composing music for Ranjha. "This song is special to me at many levels. It's been very overwhelming on the whole. I was in a very emotional state of mind during the time I recorded this song." No wonder the emotions seemed palpable here.

Winning hearts, 'Ranjha' gets 4/5 for both song, video

If you are a sucker for sad melodies, you will love Ranjha. It will undoubtedly provide a different color in the war movie set around the Kargil War. While the previous song Raataan Lambiyan had a different flavor, the quality remains the same, and the verdict too. Verdict: Ranjha gets 4/5 stars for both the song and the accompanying music video.