Baazaar trailer: Saif is here to change the money game 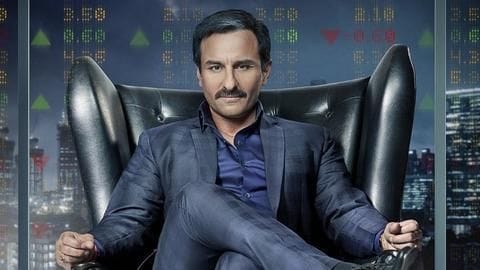 Saif Ali Khan, who has been in search of a path-breaking movie for a while now, is back to impress the audience with his upcoming release 'Baazaar'. He will be seen playing the role of a ruthless businessman, who aims to change the money game. The makers have released the trailer of 'Baazaar' and it is enough to leave you intrigued about the movie.

'Baazaar' trailer
'Baazaar' is all about stock market and money

'Baazaar' revolves around a shrewd businessman Shakun Kothari and an aspiring banker Rizwan Ahmed (played by Rohan Mehra). While Shakun wants to be the 'Usain Bolt' in the race of power and money, Rizwan's dream is to work with Kothari. The trailer gives a glimpse of this cunning story that summarizes into the tagline- 'Bada aadmi banna hai to line to cross karni hogi'

Saif's looks
Saif is in a never seen before avatar

Saif, who is often seen doing quirky roles on the big screen, will be in a never-seen-before avatar in 'Baazaar'. His character, in the movie, is about money, power and business and someone who is feared by everyone. Both the intriguing trailer and Saif's striking looks do give an impression that the Nawab of Pataudi is out with something big, this time.

'Baazaar' turns out to be an unconventional launch for Vinod Mehra's son Rohan, who plays the role of Rizwan Ahmed. Besides, the movie also stars Radhika Apte and Chitrangada Singh in key roles. 'Baazaar' is scheduled to release on October 26.

Saif's career
Will 'Baazaar' be a saviour for Saif?

Post the failure of his last three releases, Saif Ali Khan needs a hit at the box office. And if producer Nikkhil Advani is to be believed, 'Baazaar' will turn out to be Saif's best performance post 'Omkara'. Well, given his confidence, it looks like 'Baazaar' might revive Saif's otherwise sulking career.