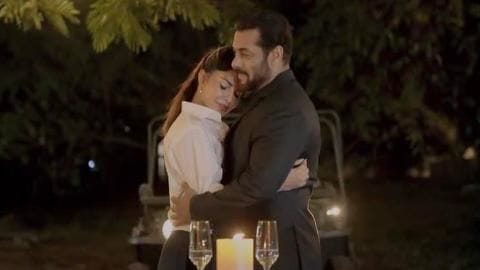 Salman Khan is keeping pretty busy during the ongoing lockdown. After Pyaar Karona, the Bollywood superstar (54) has now teased an upcoming romantic song, Tere Bina, also featuring Jacqueline Fernandez. The video song, featuring some spectacular visuals, has been shot entirely at Salman's Panvel farmhouse, where he is currently residing with Jacqueline, actor/model Waluscha De Sousa, and others. Here's more on this.

Details
The song has been written by Shabbir Ahmed

The song has been sung by Salman and composed by Ajay Bhatia. Its lyrics have been penned by Shabbir Ahmed. Salman also turned director for the music video. The song's description on YouTube reads, "Life is incomplete without that special someone, who lights up every moment of life. With them every step is an opportunity and everyday is a new beginning."

Song
Salman, Jacqueline recently opened up about the song

Speaking about the song, Salman said in a video, "The kind of song it is, it was not fitting in any film, so I thought let's release it like this." Meanwhile, Jacqueline said, "We are used to shooting for songs with big productions which take weeks of prep...For the first time, I was checking lighting, moving props around, and taking care of the makeup."

For the unversed, Salman and Jacqueline have previously worked together in movies such as Sajid Nadiadwala's Kick and action thriller Race 3. The two will also reportedly share screen space in the upcoming film, Kick 2.

Work
What's up on the work front for Salman?

Separately, on the work front, Salman will next be seen in action movie Radhe: Your Most Wanted Bhai. Directed by Prabhu Deva, the film also stars Disha Patani, Randeep Hooda, and Jackie Shroff, among others. He also has Kabhi Eid Kabhi Diwali in the pipeline. However, all productions and film releases currently remain stalled due to the COVID-19 pandemic.

Do you know?
Meanwhile, Salman is doing his bit to battle COVID-19

Meanwhile, Salman has been actively lending support to the nation's fight against the coronavirus crisis. He recently sent out free ration to some villages near his farmhouse. Before that, the actor reportedly offered financial assistance to 25,000 daily wage earners of the Indian film industry.