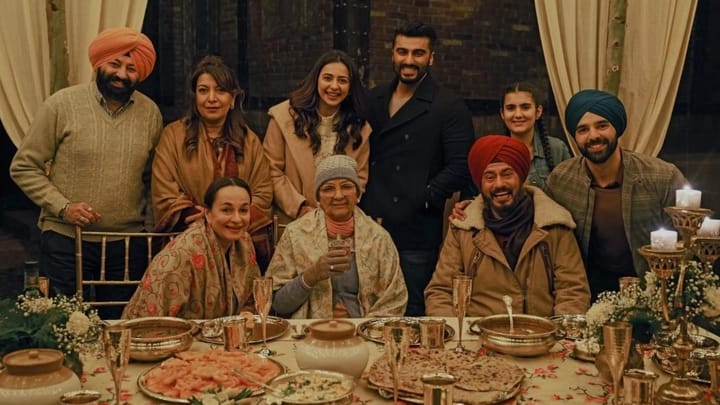 Netflix has dropped the trailer of the upcoming Hindi movie, Sardar Ka Grandson. The film stars Neena Gupta as the oldest member of an Amritsar-based Punjabi family, who has one dear wish: To go to her long-lost home in Lahore. Her NRI grandson, played by Arjun Kapoor, takes the responsibility to fulfill her wish at any cost, even if it means literally moving houses!

Wheelchair-bound 'Sardar' has one wish: To visit her Lahore home

The trailer opens with Kapoor explaining the concept of structural relocation, which refers to shifting buildings across locations. We understand its relevance when Sardar, as wheelchair-bound Gupta is affectionately called, wishes to return to her old home in Lahore but the authorities don't permit that. Kapoor takes up the challenge and plans a "home is coming," instead of "homecoming." Will he succeed?

Will the grandson be able to fulfill her wish?

Family bonding, a well-frequented theme in Indian movies, is the focus here as well. We have several flashback scenes in the trailer, where we see Aditi Rao Hydari (as Gupta's younger self), who is madly in love with her husband (played by John Abraham). She carefully invests their love in their Lahore home. Yaariyan actor Rakul Preet Singh stars as Kapoor's love interest.

The trailer followed a 'real-life photo album' of the team

It also stars Soni Razdan and Divya Seth. Sharing the trailer, Kapoor wrote "Sardar Ka Grandson isn't just about bringing back a house, it's about bringing back a home," in the caption. Before this release, Netflix had shared a heartwarming photo album of the team with their cherished family pictures. Other than the cast, producer Bhushan Kumar also featured in the album.

The family drama will release on Netflix on May 18

Directed by newcomer Kaashvie Nair, who also takes part in the nostalgic photo album, the script has been written by Anuja Chauhan. To recall, the project was announced back in 2019 but the shooting schedule was disrupted due to the pandemic. The team, however, continued shooting the endearing drama amid the pandemic. Sardar Ka Grandson will release on Netflix on May 18.