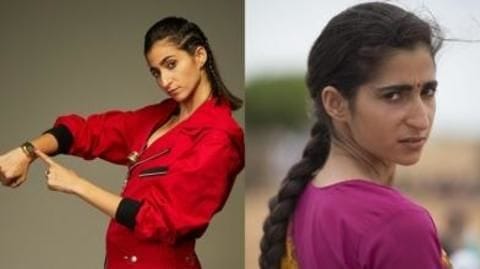 In the Netflix crime drama Money Heist, Alba Flores aka Nairobi is known for her smarts and sass. But there's much more to her. Before she joined The Professor's team for the biggest-ever heist, Flores did a variety of characters across projects. In one film, Flores played a South Indian woman and spoke fluent Telugu. Needless to mention, desi Internet is loving it!

Money Heist (or La casa de papel) is a Spanish heist drama that revolves around a mysterious man known as The Professor, who hires a group of people and leads them to carry out two ridiculously ambitious robberies in Madrid. Flores' character Nairobi, who appears in all four parts of the Netflix series, is one of the robbers.

Film
The viral clip is from the Spanish film 'Vicente Ferrer'

Now, a clip is doing the rounds on social media, where Flores is seen in an Indian avatar. The video is from the Spanish film Vicente Ferrer, directed by Agustín Crespi. The movie is based on the life and events of a Jesuit missionary, who decides to visit the state of Andhra Pradesh and live there to improve the lives of people.

Role
Indian fans just can't hold their excitement over it

In the film, Flores played the role of Shamira, a woman belonging to the village of Anthapuram in Andhra Pradesh. She is seen wearing Indian clothes and speaking fluent Telugu, which has obviously left Money Heist fans thrilled. Fans have been heaping praises upon the actress for her versatility. Plus, Indian fans are just too excited to see Nairobi in a desi avatar.

She is such a versatile actress, I’m totally amazed 😩 Can y’all believe that she played such heavy roles right in the start of her career 👀 I mean, if THAT was the start, I can’t imagine what she’ll do in the future, she’s already above the skies right now, and she achieved ALL of this fame and love with side roles 🥺 She is really out there winning millons of hearts and blowing my mind a little more everyday with every second that passes 😭 @albafloresoficial you are UNBELIEVABLE 🙌 The movie is called ‘Vicente Ferrer’ ♥️ @albafloresoficial

Apart from Vicente Ferrer, Flores has acted in movies like El calentito, Los managers, and The Memory of Water. She was most recently seen as Saray Vargas in TV series Vis a vis: El Oasis.