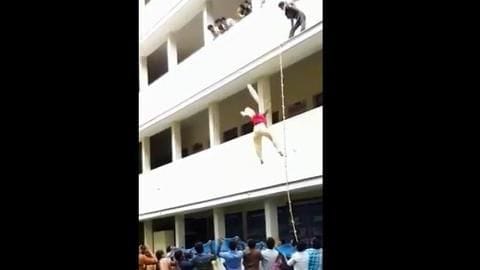 In a shocking incident, a 19-year-old BBA student in Coimbatore died when she was pushed from the second floor during a disaster preparedness drill yesterday. Volunteers were standing with a safety net on the ground, but while falling, she hit her head on the ledge of the floor below, crashing to the ground. A disturbing video of the incident is being circulated.

Witnesses said Lokeswari, the second-year student at Kalai Magal Arts and Science College, was hesitating to jump, despite some people having successfully completed the drill. The trainer, Arumugan, is seen talking to her, presumably trying to convince her, but eventually pushes her from the balcony. After the accident, she was rushed to a hospital, where she was declared "brought dead."

NDMA
Confusion over NDMA's role in the drill

College authorities told police the drill was being conducted by the National Disaster Management Authority of India (NDMA). However, Rajendra Ratnoo, Commissioner (Disaster Management), TN State Disaster Management Agency, a body under NDMA, refused knowledge of the drill. "All training sessions of the NDMA are conducted only through the District Collector," he said. Arumugan has been detained for causing death due to negligence.

Information
Case will be lodged against the college too, police say

Police said a case would be lodged against the college too for conducting the drill with "utter negligence and without adequate safety measures." Higher Education Minister KP Anbalagan has assured a probe. The body has been sent for postmortem.